Ex-Goldman Director Gupta Loses Bid To Stay Out Of Prison 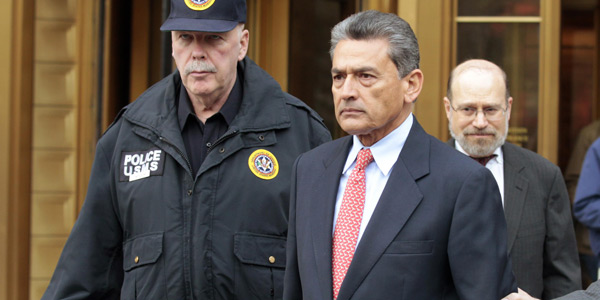 In a brief order on Friday (30 May), the 2nd US Circuit Court of Appeals in New York rejected a request by Gupta, a former global managing director of consulting firm McKinsey & Co, to delay his surrender and remain free on bail.

Gupta, 65, was convicted in June 2012 of feeding tips from Goldman board meetings to longtime friend Raj Rajaratnam, founder of the Galleon Group hedge fund firm.

Evidence included a September 2008 phone call, just before Goldman announced a $5 billion investment from Warren Buffett's Berkshire Hathaway Inc, in which Rajaratnam was heard telling a trader that he learned from a source, who prosecutors said was Gupta, that "something good might happen to Goldman."

It also included an October 2008 conversation in which Rajaratnam told a colleague that a Goldman director had tipped him that the bank would post a quarterly loss.

A three-judge 2nd Circuit panel rejected Gupta's appeal on March 25. Gupta sought to stay out of prison while the full 2nd Circuit Court, and perhaps the US Supreme Court, reviews his case.

Rajaratnam is appealing his conviction to the Supreme Court. He is serving an 11-year prison term.

Seth Waxman and Gary Naftalis, two of Gupta's lawyers, were not immediately available for comment on Friday.

His lawyers have argued that Gupta's conviction was tainted by US District Judge Jed Rakoff's decision to admit wiretap evidence at trial, and the judge's refusal to tell jurors that Gupta's good character could raise a reasonable doubt of guilt. The lawyers also said Gupta is neither a flight risk nor a danger to the community.

Rakoff has agreed to recommend that Gupta be assigned to a medium-security prison in Otisville, New York, about 70 miles (113 km) northwest of New York City.