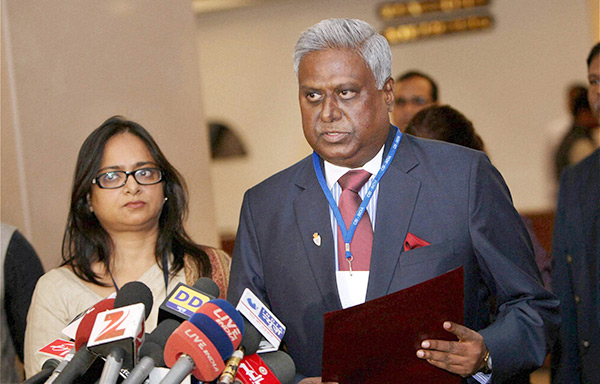 22 May, 2015
Print this article Font size -16+
Terming as “inappropriate” the alleged meetings of former CBI Director Ranjit Kumar Sinha with the accused in coalgate and 2G cases, the Supreme Court today said the matter “needs to be investigated” and asked the Central Vigilance Commission (CVC) to assist it.
A bench headed by Justice Madan B Lokur said there is merit in the allegations that Sinha met persons in the absence of investigating officers of the cases and asked the CVC to file a report on the entire issue on or before July 6.
“We see merits in the submission. It is inappropriate on the part of CBI Director to meet persons in the absence of IOs,” said the bench, also comprising Justices Kurian Joseph and A K Sikri.
It also dismissed Sinha’s plea seeking prosecution of lawyer Prashant Bhushan for alleged perjury.
Bhushan had filed the plea on behalf of an NGO seeking a probe by a Special Investigating Team (SIT) against Sinha for alleged abuse of position for scuttling the probe into a coal block allocation scam case.
In the plea, NGO Common Cause had alleged that entries in the visitors’ register of the former CBI Director’s residence had made it clear that he was meeting the high-profile accused and those associated with coal block allocation.
The plea had said there was a need for a court-monitored SIT investigation to ascertain “whether any consideration exchanged hands”.
The bench had reserved its judgement on April 13 in the matter in which Sinha had claimed that a “hidden hand” was the “controlling mind” of Bhushan and had accused him of interfering and scuttling the probe into the coalgate.
The NGO, in its application, had submitted that since the Anti-Corruption Bureau (ACB) of Delhi Police had not lodged an FIR on its November 25, 2014 complaint, there was a need for a court-monitored probe for alleged abuse of authority by Sinha as the then director of CBI.
However, Sinha had rejected the NGO’s claim that he and a few other senior officers of the level of Joint Director repeatedly overruled the investigating officers (IOs) and forced them not to register FIRs/RCs in cases where Preliminary Enquiries had been registered and directed closure of the cases.
In the plea for perjury against the NGO and Bhushan, Sinha’s counsel had said “there is not a single case in which Sinha overruled the unanimous opinion of the officers working under him with regard to recommending closure in which they have recommended conversion to a regular case.
“Thus, the falsity of the statement made before this Court is evident from this count alone.”
Tags assigned to this article:
coalgate ranjit sinha