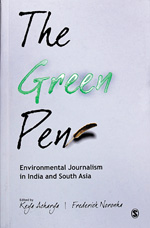 Both Economics and Ecology share the same parent: oikos in Greek. The word means house or home. Economics is the science of keeping the house in order, while ecology makes sure the house has enough resources, notes Darryl D'Monte, one of the pioneers of green reporting in India. D'Monte's foreword to The Green Pen: Environmental Journalism In India And South Asia (Sage Publications) establishes the umbilical link between the siblings at war with each other. The book, edited by Keya Acharya and Frederick Noronha, is a collection of essays.

It was in the 1980s that green issues started gaining media attention, but they lacked dedicated publications. Two decades later, green writing is much matured, though it still has a long way to go to become a full-fledged task force. Today, South Asia has several niche publications on environmental issues and ecology. This herd includes the well-regarded Down To Earth, which the late Anil Agarwal founded in May 1992. Along with Agarwal, the book features other prominent green, development writers in South Asia. The book has 10 neatly divided sections that discuss a slew of topics. And each essay reminds one why environmental journalism is essential for equitable growth and future. And why there should be an immediate, peaceful coexistence between the battling siblings — ecology and economics