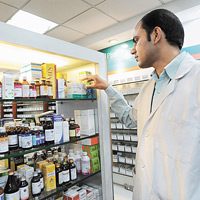 08 November, 2014
Print this article Font size -16+
The pharmaceutical industry will take a Rs 10,000 crore hit to its domestic revenues if the central government approves the suggestion of a group of ministers (GoM) to control the prices of all essential drugs sold in the country. After a three-year-long deliberation, the GoM, headed by agriculture minister Sharad Pawar, has recommended a formula for capping the prices of all 348 drugs mentioned under the National List of Essential Medicines (NLEM). The plan is to take the weighted average prices of all brands having at least 1 per cent or more market share by volume as the ceiling price of that particular drug. The move will see the quantum of price- controlled medicines in the country increasing from the current 18 per cent to 30 per cent of the total market.
Plans Grounded
After the 49 per cent FDI in aviation comes a dampener: the aviation ministry will not hand out fresh licences to greenfield airlines, at least for now. This means anyone with plans to start a new airline in India will have to wait, but those who want to form a joint venture with existing airlines will find the doors open.
Expanding Horizons
Investment management firm Invesco is acquiring 49 per cent stake in Religare Asset Management (RAM), which is among the top 15 asset management firms in India, with combined (onshore and offshore  advisory) assets under management of over $2.6 billion. The move will increase Invesco’s presence in India, while giving Religare’s clients access to more investment solutions.
Bonds To The Rescue
The Reserve Bank of India will auction bonds worth Rs 1,30,000 crore in the quarter ending December. This will help the government adhere to its budgeted borrowing limit of
Rs 5,70,000 crore in the current fiscal. The central bank has already auctioned bonds worth Rs 3,70,000 crore this fiscal.
Lending A Hand
YES Bank received a retail equities broking licence from the RBI. The bank expects to launch operations of the securities broking business during FY 2013-14, it said. YES Bank said the broking business would offer synergies to its retail savings and loan offerings. “The timing is opportune given our thrust and focus on retail banking,” said Rana Kapoor, CEO.
Fixing Libor
The London interbank lending rate, Libor, which was hit by a rate manipulation scandal, will be revamped soon. The number of daily fixings will be reduced from 150 to just 20, and the number of currencies from 10 to five. But the banks that submit Libor estimates will go up. Also, Libor will now be under an administrator and not the British Bankers' Association.
In The Ranks
India fared poorly in two global surveys in the past week. In a survey on economic freedom (the degree to which the policies and institutions of countries support economic freedom) by Fraser Institute, Canada, India ranked a lowly 111, behind countries like China and Nepal. Hong Kong topped the 144-nation list.
In the 105-country global food security index (on affordability, availability, quality and safety) released by DuPont, India ranked 66, behind China (39) and Sri Lanka (62).
Roam Free
Minister of communications and information technology Kapil Sibal has said that mobile phone users will not have to pay any roaming charges from next year. If such a decision is taken, the telecom operators will have to do a lot of back-end work — in terms of technology and contracts with other operators. Also, their revenues will suffer.
Smell The Coffee
Mumbai will be the first city to get a Starbucks outlet in India, in October. Partnering with Tata Global Beverages, Starbucks’ Horniman Circle outlet will serve “locally sourced espresso”, said John Culver, Starbucks China & Asia Pacific president. Delhi will get the next outlet, in 2013.