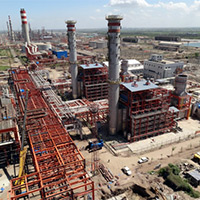 08 November, 2014
Print this article Font size -16+
Essar Energy Plc said it expects another strong year, backed by continued improvement in refining margins and higher demand from its core Indian market, sending shares up as much as 4 per cent.

The London-listed power, oil and gas arm of privately owned Indian conglomerate Essar Group, forecast demand for diesel to rise as much as 7 per cent, and gasoline as much as 5 per cent, annually in India.

Diesel, which accounts for a third of the country's fuel use, powers small- to medium-sized generators to run air-conditioners and makes up for low hydro power output in the dry season. When the monsoon rains hit, the lower demand for power use and irrigation leaves India refiners with plenty to export.

"Vadinar is one of the lowest cost refineries in the world (more so with the depreciation of the Indian rupee), therefore it benefits from the option to redirect product to the international market," Bank of America Merrill Lynch analyst Laura Webster said.

Essar Energy said it expects refining margins at its Vadinar refinery in Gujarat to run about $7 to $8 per barrel above the International Energy Agency's Singapore benchmark. Margins at the refinery rose 79 per cent to $7.96 per barrel for the year ended 31 March.

"We believe that refining margins globally will remain at current levels, or maybe, as we come closer to the third quarter, will strengthen a bit -- that will have a very positive impact on our business," Chief Executive Naresh Nayyar said on a post-earnings call.

Essar Energy said 59 per cent of Vadinar's full-year output, which is mostly sold in India, was middle distillates -- diesel, gasoil, jet fuel and kerosene, up from 43 per cent a year earlier. "The recent steps taken by the Government of India to reduce the heavy subsidy of retail diesel prices are encouraging," Essar Energy said in a statement.

"As current subsidies are removed, and retail sales become profitable, there will be an opportunity for Essar Oil to expand its franchise network of around 1,400 retail fuel outlets."

Earlier this year, the Indian government said state-run fuel retailers would be responsible for diesel pricing, though with the government still retaining some control, a change from the previous system where the cabinet set prices.

Essar Energy on Monday reported better-than-expected full-year earnings as increasing capacity at its Vadinar and Stanlow oil refineries pushed up margins. Margins at Essar Energy's Stanlow refinery in Britain more than doubled to $7.38 per barrel.

This year, 61 per cent of Vadinar's full-year output came from the use of cheaper, higher-margin ultra heavy crude, compared to 19 per cent a year earlier.

Essar Energy said earnings before interest, taxation, depreciation and amortisation, on a current price basis, was $1.34 billion in the year ended March 31, compared with a company-provided analysts' estimate of $1.17 billion.

The company this year moved its year end to March from December, making the previous comparative period a 15 month one.