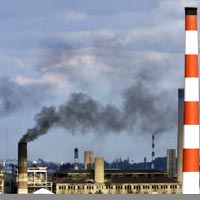 16 June, 2015
Print this article Font size -16+
On a 2.4 per cent of the world's land area, India has almost 17.5 per cent of the world's population. As per the UN forecast, India is going to be the most populous country in the world surpassing China by the year 2028. Although the huge population contributes significantly towards the growth of the country, it raises concerns for environmental protection. There is rapid increase in urbanisation as most of the population is engaged in non-agricultural pursuits. Urbanisation is contributing in high CO2 emissions as industries and vehicles consume non-renewable sources in abundance. India is the 4th largest emitter of CO2 with 7.1 per cent of the total, after China, US and EU who contribute 29 per cent, 15 per cent and 10 per cent respectively.

Emission of Industrial waste, lack of sanitation facilities and deforestation are damaging water resources. 70% of the industrial waste is dumped into the water bodies. As per report by Forest Survey of India (FSI), approximately 45 per cent of India's land is degraded primarily due to deforestation, unsustainable agricultural practices, mining and excessive groundwater extraction. More than 2/3rd of this land could be regenerated. Most of the industries continue to ignore the air and water treatment regulations and emit toxic air and water into the environment. It is estimated that around 37.7 million Indians are affected by water borne diseases annually, 1.5 million children are estimated to die of diarrhoea alone and 73 million working days are lost due to water borne diseases each year. The problem of chemical contamination is also prevalent in India with 1.95 lakh habitations in the country affected by poor quality water.

As per WHO, India ranked 9th worst country for air pollution with average PM2.5 level of 59 ug/m3 which can cause premature death, chronic bronchitis and decreased lung function.

Indian coal production rose by 28.5 per cent from 407 million tonnes (MT) in 2005-06 to 558 MT in 2012-13 and it aims to double production to 1 billion tonnes a year by 2019 which will significantly damage the environment. There has been a steady rise in coal import in India from 39 MT in 2005-06 to 138 MT in 2012-13. According to the India Renewable Energy Status Report 2014, the installed capacity of renewable energy has touched only 12.95% of the total potential available in the country, which shows huge growth potential for renewable energy in India.

Solutions from Technology, Media and Telecom Technology:
Water Monitoring and Remote Sensing: Satellite and ground remote sensor technologies are widely used to monitor the quality of water. Nutrient pollution i.e excess nitrogen and phosphorous from land increases algal growth in many water bodies.e.g. Researchers used NASA's SeaWiFS satellite to measure the amount of chlorophyll-a, a pigment present in algae, as a way of monitoring nutrient pollution in coastal water of Florida.

Thermal depolymerisation: This is an innovative technology in which any carbon-based waste - used tires, plants or turkey guts, can be converted to oil by applying sufficient heat and pressure. A ton of turkey waste can produce 600 pounds of petroleum. This can help in minimizing land and soil pollution.

Going Digital: 42 per cent of all global wood harvest is used to make paper and 324 litres of water is used to make 1 kg of paper.Recycling 1 ton of paper saves around 682.5 gallons of oil, 26,500 litters of water and 17 trees. Use of technology to store and read the documents and news online can reduce the paper production significantly which will help in reduced deforestation.

Field to Market: General Mills and Walmart collaborated for an initiative "Field to Market" to accelerate innovation in sustainable agriculture and to reduce greenhouse gas (GHG) emissions. The use of Fieldprint Calculator helps in monitoring and increasing productivity and Fertigation technology prevents the loss of nitrogen into the air while the aerial imagery analysis technologies helps in efficient use of pesticidesavoiding the cost and potential environmental damage of spraying an entire field.

Alternate Energy: The development in technology is enabling the use of natural resources to produce energy in an environment friendly manner. The Charanka Solar Park in Gujarat is an "ultra-mega" power project (planned 750 MW capacity) and the biggest in Asia. Other alternate sources like tidal or wind could be used to generate green energy from the vast surrounding of sea and ocean water in India. Tesla and its founder, Elon Musk, launched Tesla Energy and its new affordable battery system, which uses solar energy to power homes and businesses.

Analytics: Analytics can play a major role in environment protection by providing tools to analyse past data, current trends and thus forecast the future critical variables. It can help in finding the economic impact of climate change and the solutions can be implemented to deal with it. e.g. A British Water Company is using data visualization to help conserve water by bringing operational data about metering, water flows, pump efficiencies and leaks to life.
Media:

From the issues like pollution to the climate change, the media had been playing a vital role in creating awareness and raising issues in relevant forums across the globe.

Reality Shows: There are many reality shows like SatyamevJayate encouraging and educating citizens to contribute to environmental protection. Zee media's My Earth My Duty was a successful awareness initiative on World Environment Day.

Social Responsibility Activities: CSR activities in organisations for environmental protection are playing a key role in increasing awareness among people. Celebration of days such as Bus Day, Earth Day is helping in educating people regarding low carbon emissions, pooling vehicles, importance of public transports systems, etc. Government is also taking critical steps to increase awareness among public for a cleaner environment through projects like Clean Ganga, Swatch Bharat, SulabhSauchalay among others.

Telepresence: Online meetings and virtual meeting rooms are cutting down the travelling time and cost, thus saving a significant amount of CO2 emission. A report by Carbon Disclosure Project (CDP) revealed that videoconferencing can cut CO2 emissions by nearly 5.5 million metric tons by 2020 for US and UK businesses.

Cloud: Cloud based storage helps in minimizing the use of paper by storing photos, documents, etc. directly in cloud and accessing it anytime from anywhere.