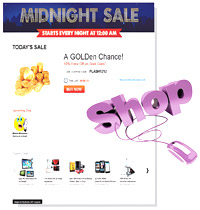 08 November, 2014
Print this article Font size -16+
E-tailers are rewriting the Cinderella script. Come midnight and it’s no longer the curfew hour, but the best time to take out your credit card. As a whole new demography of nocturnal consumers opens up, e-tailers are putting in a lot of their might behind the first two hours past midnight. And it’s delivering stunning results: most large e-tailers report up to 20 per cent of their sales from those two hours, the highest in any two-hour period.
New deals go live on Indiatimes’s Midnight Sales every night at 12. “The idea was to give a boost to the traffic which tends to drop in the wee hours of the morning. The trend over the past month clearly indicates a surge of traffic and transacting customers from midnight to 2 a.m.,” says Subhanker Sarker, COO of Indiatimes Shopping. Others cashing in on the night traffic are Homeshop18.com, Tradus.com and Goibibo.com.
Narasimha Jayakumar, COO of Homeshop18, says their midnight sales which are held 3-4 days a week are aimed at the youth and working population which stays awake late due to their jobs or lifestyle. He says items such as lingerie and contraceptives are often bought late at night. “The youngsters prefer to buy these products at night, away from the eyes of elders and co-workers.” Nearly 20 per cent of Homeshop18’s sales are from the 2-hour period.
On Indiatimes, electronics goods get picked up the most at night. According to Sarker, when a family is sitting together late at night, it is easier to take a decision and buy a product. He also reports a good uptick in midnight sales. Tej Kapoor, vice president of Tradus.com, too, reports a spike in consumer activity past midnight. “We have observed a 15-20 per cent increase in consumer activity, after our daily deals started going live at midnight,” he says. Even Google India’s ‘Great Online Shopping Festival’, inspired by the annual Cyber Monday held in the US, kicked off at the witching hour opening up a host of exciting deals for cyber night owls.
As the community of night owls grows, it is giving rise to the trend of midnight delivery. More and more consumers want to surprise their loved ones with a midnight gift — cake or flowers usually. Pawan Gadia, CEO of Ferns N Petals, says, “The trend is quite recent. In Delhi-NCR alone, we do almost 150 deliveries daily and out of these, 10-12 are midnight deliveries.”
Homeshop18 offers what it calls the “serenade service” where a delivery boy is sent along with the gifts and flowers to sing for the birthday boy or girl. The service is popular among boyfriends and newlywed husbands.
Auto giant Ford has been holding an annual Midnight Sale for the last three years now. This year, its December Dhamaka Midnight Sale showed an impressive 77 per cent increase in sales compared to last year’s event.
But now e-tailers are taking a bigger slice of the nocturnal pie. For shoppers it only spells good news. In the modern day Cinderella story, the carriage does not turn into a pumpkin – but there’s a good chance you could buy a carriage for the price of a pumpkin!