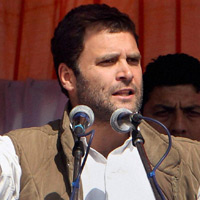 08 November, 2014
Print this article Font size -16+
Rahul Gandhi embraced his role as a leading contender for India's next prime minister in a speech on Sunday that spoke of his family's tragic history but yielded few clues about his views on politics and the economy.

Gandhi is heir to a dynasty that began with India's first prime minister Jawaharlal Nehru and is now headed by his mother, Sonia Gandhi, president of the ruling Congress party. His background and relative youth make him the party's main hope for elections due next year in the world's largest democracy.

His father Rajiv and grandmother Indira were both prime ministers and were both assasinated, which the 42-year-old Rahul suggested was a factor in his earlier reluctance to assume a big role in one of the world's oldest and largest political parties.

Sharing a stage with Prime Minister Manmohan Singh, the finance minister and other leading members of the cabinet, Gandhi told a packed auditorium of party workers about playing badminton with the men who shot his grandmother when he was eight years old.

"I was taught how to play in my grandmother's house by two policemen who protected my grandmother. They were my friends, then one day they killed my grandmother and took away the balance in my life," Gandhi told the rapt audience.

"Last night my mother came to my room and she cried," he said. "She cried because she understands the power that so many people seek is actually a poison. She can see it, what it does to people around and to the people they love," he said.

Late on Saturday at a weekend long brainstorming meeting, Gandhi was anointed vice-president of the party, which carried India to independence from the British and has ruled for much of the 66 years since, headed four times by his kin.

Congress won a second consecutive term leading the governing coalition in 2009 thanks to fast economic growth and welfare policies that helped the rural poor.

Since then it has disappointed voters, especially in the fast-growing cities, with a string of corruption scandals and a weaker economy. But it faces a divided opposition and still has a fair chance of returning to power in the next elections.

Scalded by spontaneous anti-rape and corruption protests near the seat of government in New Delhi, the party is scrambling to win over an angry and influential young urban population. Gandhi represents the party's youth wing, and his emergence as a new leader is an attempt to project a fresh face for the 127-year-old organisation.

Unifying Figure?
The speech was widely praised as "inspirational" by party members and analysts, but the previously reticent leader, who led two losing campaigns at state level, will now have to prove himself leading up to a general election due next year.

Gandhi has been silent for most of the past 12 months and is rarely heard in parliament where he was elected eight years ago.

At the weekend-long meeting in Jaipur where he spoke, he kept mostly out of sight, absent on stage even as the octogenarian prime minister sat cross-legged on a mattress listening to speech after speech praising the young Gandhi.

He is widely seen as a shy character who has entered politics because his party requires a unifying figure, more than from personal drive.

"He might give you the feeling that he is a little lost or something, that he's shy of words, but once he knows you he's as sharp as a whip," said one regional party spokesman who has met Gandhi.

"He becomes a little different once he's comfortable, and we have to appreciate ... that he had a sheltered kind of upbringing, through no fault of his, because of the security concerns."

Gandhi has so far said little about his views on how best to manage Asia's third-largest economy, which is headed for the slowest rate of growth in a decade this financial year.

In his speech, he called for an end to "red tape and outdated laws" that slow job creation. Along with his mother he has recently thrown his weight behind economic reforms that Prime Minister Singh has pushed in a bid to revive growth and stabilise the economy.

With no direct reference to his own hereditary ascent to prominence, Gandhi lashed out at entrenched elites he said stifled talent in India and fed discontent among the youth.

"Power is grossly centralised in our country, we only empower people at the top of a system," he said.

The theme of youth that dominated the three-day meeting, called to analyse challenges the party faces before the elections, echoed the 1980s era that brought his father Rajiv Gandhi into politics after the death of Indira Gandhi.

His father failed to overhaul the party but is widely credited with ushering in the telecoms and technology revolutions that have driven India's economic growth ever since.

Gandhi's address appeared to draw from U.S. President Barack Obama's narrative-driven rhetoric, with a repeated theme of hope and heartfelt anecdotes in the speech, breaking with a tradition of dry, technical speeches from Indian politicians.

But a cabinet minister close to the party leadership warned that the task ahead for Gandhi was not easy.

"The challenges are many, the expectations are many," said the minister. "He has his work cut out. Competition is intense. It will be baptism by fire."