Empire Of The Moghul 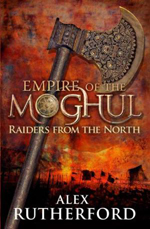 Empire of the Moghul: Raiders from the North
By Alex Rutherford; Headline Books (Hachette)

In an ambitious project to relate the saga of one of the most powerful and culturally influential dynasties of the world, the Moghuls, author Alex Rutherford has envisaged an exhaustive five-novel series about the Moghuls. Recounting the rulers' glorious reign, which spanned more than 200 years and saw six audacious rulers, the author's objective seems to be highlighting the legacy of the medieval empire to the western audience. This first book in the series documents Babur's trysts and triumphs in establishing his foothold in India, and the convoluted course of events that followed.