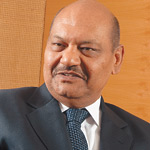 The $6.5-billion Vedanta Resources, the holding company of Anil Agarwal group of companies, is playing the aluminium game. It produced half-a-million tonne of aluminium in FY09 through its various group companies — Vedanta Aluminium, Balco and Madras Aluminium. But with its investments of close to $10 billion into aluminium-related projects, it hopes to produce 2.5 million tonnes (mt) of aluminium in the next few years, reaching the top league of aluminium producers.

Bulk of the aluminium expansion for the group is happening on the balance sheet of Vedanta Aluminium. "Consumption of aluminium is not going to reduce anytime soon and its prices will remain in the range of $1,500-1,700 per tonne," Agarwal had said in an earlier interview with BW. "Our target is to produce aluminium at $800 per tonne." Currently, it is hovering above  $1,920 a tonne.

Till recently, the Lanjigarh unit in Orissa got its bauxite from Chhattisgarh. The management now plans to cut cost by using the high-grade Niyamgiri bauxite mines in Orissa and shift the bulk of operations to the state. But protests  from environmentalists has forced the management into fire fighting mode.

Vedanta Aluminium entered BW's listing this year because CMIE managed to get its finance data. The company, ranked 59 this year, made it to the list largely because of its higher asset base — over Rs 17,550 crore.

Clearly, it is an investment phase for the group as its profitability remain hinged on world economic conditions and future of industries such as auto, construction and packaging. And higher inventory levels at the London Metal Exchange at this juncture is not so encouraging either.

The entry of Reliance Power, a Reliance-Anil Dhirubhai Ambani Group (R-ADAG) company, in this year's BW 500 rankings is largely on account of its huge asset base of more than Rs 15,000 crore. With none of its power plants operational yet, the company has no income from its core business of power generation. All of its relatively meagre income of Rs 360 crore in  the financial year 2008-09 has come essentially from investments in money market and other instruments.

The first watt of electricity from Reliance Power will come only in March 2010, when its Rosa plant at Shahjahanpur in Uttar Pradesh is expected to go live. In all, the company has a multi-fuel project portfolio of more than 33,000 megawatt (MW), comprising 19,000 MW of coal, 10,000 MW of gas and 4,000 MW of hydro-based capacities.

The company has bagged three of the four ultra-mega power plants (UMPPs) of 4,000 MW capacity each in Sasan, Madhya Pradesh; Krishnapatnam, Andhra Pradesh and Tilaiya, Jharkhand (the fourth one, at Mundra in Gujarat, has gone to Tata Power). So far, Reliance Power has managed to achieve financial closure for only 5,000 MW of greenfield projects worth more than Rs 25,000 crore.

The company spokesperson Ashwin Kumar, however, is not worried by the slow progress: "We have a clear revenue visibility in our sustainable power business, which has access to customers and has secured fuels for the projects." Reliance Power wants to use a significant chunk of its planned capacity for merchant power.

Having completed 50 per cent of the 600- MW Rosa thermal power project in just 14 months, Reliance Power is trying to improve its execution record. It wants to fund future projects through a 75:25 debt-equity mix. Its initial public offering (IPO) last year helped it mop up $3 billion — before the market crashed. The stock, however, is now trading at around Rs 160, compared to its offer price of Rs 430 (plus a bonus issue) before it listed last February on the Bombay Stock Exchange. Shareholders will just have to wait longer to get value from the company. And so will power consumers.

The $80-billion education market in India is growing at a compound annual growth rate of 16 per cent, even though 142 million of the 361 million children in the relevant age group do not have access to schools. K12 (kindergarten to Class XII) segment forms the biggest chunk of the education pie, but only 7 per cent of India's 950,000 schools are private. Yet, they cater to 40 per cent of students. Educomp realised the potential of the sector early enough, and is today one of the few players that has its shares actively traded on stock exchanges. Ask managing director Shantanu Prakash the reason behind more than 100 per cent jump in the company's net profit — from Rs 71.70 crore in 2008 to Rs 143.46 in 2009 — and he candidly admits that it is the advantage of being small.

The company's share has been extremely volatile — currently trading at around Rs 4,700, it had hit a low of Rs 1,666 on 20 October 2008 within seven weeks of touching Rs 3,921 on 2 September. Despite allegations of manipulations in account books, analysts such as JPMorgan, Merrill Lynch and HDFC Securities, suggest buying Educomp stock.

Betting big on multimedia in education, the company built its base on SmartClass, a package of hardware and software for e-learning in classrooms. Nearly 1,000 private schools today use the package. After 15 years in the field, the company has now devised a three-tier structure to set up, operate and manage schools to overcome regulatory issues in education.

The company is also working on O3 — One-On-One computing solutions — on the lines of one-laptop-per-child project of the US-based non-profit organisation by the same name. The  focus, however, is on developing personalised content to suit every child's learning capabilities.

Apparel retailer Provogue (India), which started out with just one product, men's fashion shirt, in 1998, is in a strange situation. Its core business, retail, is yet to deliver the company any cash. But it has still managed to nearly triple its profits, thanks to money coming in from financial services. According to the company, treasury services contributed Rs 55 crore to its profits, while interest earnings from cash reserves on longer-term deposit
instruments brought in Rs 21 crore.

A mid-cap retailer in which foreign investors — including private equity funds such as New Vernon and Sandstone Capital — hold 26 per cent share, Provogue now plans to develop malls in Aurangabad, Jaipur and Coimbatore over the next two years. Currently, it has over 126 shop-in-shops and 140 standalone stores. It hopes to invest Rs 35 crore to add another 20 standalone stores by end-March 2010.

"We entered the shopping centre business because we could see a significant gap between supply and demand of quality trading platforms for retailers in India, including our own Provogue stores," says Salil Chaturvedi, deputy managing director.

Chaturvedi says the company knew that the retail business would require extensive knowledge on design and construction, and so entered into a joint venture with Liberty International, a UK-based retail infrastructure developer. Hopefully, retail sales, too, will start showing signs of growth soon.

This is a ‘different' one in the club. A toys and quilts company, Hanung Toys & Textiles, has made it to the BW 500 for the first time. In 2008-09, it notched up revenues of Rs 638 crore, a rise of 30 per cent compared to last fiscal, despite the slump in consumer spending in the US and Europe. It bargained off margins to sustain topline growth — its post-tax profit increased only 6 per cent.

The company has an order book of almost Rs 800 crore and it plans to expand production capacity by about a quarter for both toys and furnishings. It is also considering entering the hard toys market. It wants to raise about Rs 120 crore for capex and about the same amount for working capital to reduce interest costs. Currently, the company is using almost Rs 300 crore as working capital. The money is most likely to come through a qualified institutional placement (QIP) a couple of months down the line as Chairman and Managing Director Ashok Kumar Bansal would like to milk the resurgent stock of the company for its worth in a rising market. Hanung's stock is still quoting below its book value of Rs 128 despite a recent run up to Rs 112 from Rs 70 level.

"The topline growth will be driven by furnishings," says Bansal. "They allow easier scaling up since there is a greater role for machine production in furnishings compared to toys, which require skilled labour." It is a steady, unspectacular business, without much downside. Only a cataclysmic currency fluctuation could put Hanung in a spot, as it garners three-fourth of its revenues from exports.