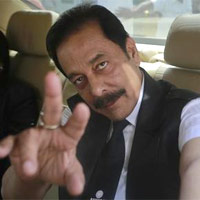 08 November, 2014
Print this article Font size -16+
The embattled Sahara conglomerate is looking to bring equity and debt investment into its businesses as an ongoing dispute with the Securities and Exchange Board of India (Sebi) has set back its growth.

Unlisted Sahara, a household name in India through its sponsorship of the national cricket team, has been ordered by the Supreme Court to repay billions of dollars it raised from millions of small investors in outlawed bonds.

Sahara says it has paid back most investors and its total liability is less than the Rs 5,120 crore it has deposited with the regulator.

"Out of turn, when you have to make payments, it affects the cashflow," Sahara chief Subrata Roy said in an interview at the sprawling gated complex where he lives and works in the capital of Uttar Pradesh, India's most populous state.

The unlisted group has vast real estate holdings as well as operations in media and hotels, including the Plaza Hotel in New York and London's Grosvenor House.

Roy, 64, said the company was looking to bring in corporate or financial equity partners to take minority stakes in some Sahara businesses including its Q Shop retail chain, a large dairy project in India and real estate ventures. He did not identify any potential investors, who presumably would need to overcome concerns about Sahara's ongoing issues, but said he may offer stakes of 10-20 per cent.

"Malicious" Move
The market regulator has accused Sahara of failing to comply with the court order and has sought approval to arrest Roy and two other Sahara directors. In full-page newspaper ads in March, Roy challenged the regulator to a televised face-off, calling the regulator's move "malicious".

On Monday, Roy said Sahara had previously not been interested in bringing in equity partners, but would now look for such investors to bring debt, too. Sahara does not have significant bank debt.

He said the tussle with Sebi had set its growth back by a year or two. "We have now said, yes, we will give equity, provided equity also brings a bigger amount of debt with it," he said.

Sahara has two small listed units and Roy said the company has no plans for any further listing. A draft prospectus for the IPO of another Sahara business had brought the now-outlawed bond scheme to the attention of regulators.

Despite its profile, Sahara is outside the mainstream of corporate India. Unlike many Indian CEOs, Roy is not a regular on the industry conference circuit, and is often photographed with cricketers and Bollywood stars.

Roy calls himself managing worker and chairman of Sahara and "chief guardian" of the world's biggest family, with nearly a million staff and agents. The conglomerate's full name is Sahara India Pariwar, which means family, and is known for public displays of patriotism.

Earlier on Monday, Roy presided over an attempt to set a world record for the number of people singing a national anthem. On the outskirts of Lucknow, he led a sea of Sahara staff and agents in song, with the men in the corporate uniform of white shirt and black tie with Sahara logo, the women in a black-and-red bordered saree.