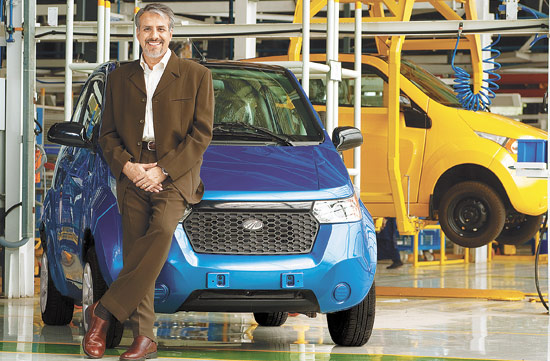 08 November, 2014
Print this article Font size -16+
April 2002. A lean six-foot-something man with a ‘French beard’ and a thick mop of hair walks into Businessworld’s office at 9.55 am, five minutes before the appointed time. For the next 90 minutes, Chetan Maini talks incessantly about his passion Reva, the electric car he launched the previous year. One moment, he sounds like an obsessive scientist; at another, he’s an enthusiastic marketer and, at times, he’s a crazy toymaker. He tops off the meeting with a 20-minute test drive on the Reva. “Great salesman, huh?” remarks a colleague. “No, a dreamer,” says the other.

March 2013: Twelve years on, Maini is as lean as ever. His beard has greyed and the crop of hair is now more salt than pepper. But Maini still talks of the Reva with a glint in his eye as he shows BW  | Businessworld around the new Rs 45-crore plant, located 30 km outside Bangalore, for building the next-generation Revas — NXG and NXR.

More than a decade of government apathy towards electric vehicles, lukewarm response from the market — except the UK, where it’s the best-selling electric vehicle thanks to government subsidy and support — and constant barbs about the Reva’s ‘looks’ haven’t dimmed his enthusiasm one bit. Maini persevered with his dream. “Ever since that solar car race that I won as a university graduate in the US, I have known what I wanted to do with my career,” he says.

In 2010, when funds came in the way of his dream, Maini agreed to sell a substantial part of his closely held Reva Electric Car Company to Mahindra & Mahindra (M&M), which retained him as chief of strategy and technology. Thus began a new chapter, under the name Mahindra Reva Electric Vehicles.

Three years into the takeover, the NXR — re-christened the Mahindra Reva e2o — rolled out on 18 March in Delhi and on 3 April in Bangalore and nobody was more anxious about the response it evoked than Maini. After all, his was the pioneering effort.

In 2001, long before global automobile giants General Motors and Renault-Nissan set their sights on an electric vehicle, it was Bangalore-based Maini who launched India’s first and the world’s only mass-produced electric car.

The new Mahindra Reva e2o promises to overcome several of the Reva’s shortcomings. What some called the Reva’s ‘chimp-like’ looks have given way to a contemporary design. That has, in turn, given it more cabin space, allowing four adults to sit comfortably as opposed to the two adults and two kids in the previous version.
Larger lithium-ion batteries have enhanced the car’s range from 80 km to 100 km on a full charge. And it now has one of the most advanced cockpits among cars in its class, including online diagnostics, Internet connectivity and a Rs 1.5 lakh solar charging panel on the roof.

But is all this enough to ensure the commercial success of an electric car? Will Maini be remembered as a maverick scientist or a visionary way ahead of his time?

Two decades ago, while still an undergraduate at the University of Michigan, Maini competed in a cross-country race in the US in a solar-powered car and finished third. It was the beginning of a dream that led to India’s first electric car. However, a decade later, Maini had not managed to make the most of his first-mover advantage. Reva had sold only 4,000 vehicles, of which 50 per cent were in overseas markets.

“The electric car is not just about driving a clean car. It’s about personalisation. The new Reva will be more personal than any other car on the road,” says Maini. Mobility in the future, for him, will be centred around clean, convenient, connected, clever and cost-effective technology. “In an era of rising inflation and fuel costs, the future for us lies here,” says Maini.

The Dreamer
Maini’s love for mechanics dates back to his school days. While most of his classmates spent their time talking about sports and girls, Maini spent afternoons on Bangalore’s JC Road, looking for parts to use for his science projects. At a time when other children were playing with toy cars, Maini built radio-controlled cars and plane models. He often asked his father to send over an engineer from the family-owned auto components company, Maini Group, to help him build these models. It was his love for mechanics that led him to pursue a masters in the subject at Stanford University in the US.
break-page-break
At Stanford, Maini met Lon Bell, a holder of several patents for rocket propulsion and engine technology, and asked him to guide the Maini Group in building an electric vehicle. With Bell, who remains on the board of ­Mahindra Reva and was the founder of Amerigon (a maker of products based on thermo-electric ­technology), Maini set up Maini-Amerigon in 1995.

Five years later, Maini founded the Reva Electric Car Company and sold his first commercial car in 2001. At that time, the company’s annual capacity was a mere 1,200 units, which Maini planned to scale up to 12,000 units in a couple of years.

Reva, however, did not meet with commercial success. Undaunted, Maini participated in all global automobile shows and presented papers on the future of the electric car. In 2006, he showcased a ‘connected’ car, which could offer Internet-based services to the driver. At that point in time only GM — with the OnStar — had the know-how for a ‘connected’ car.

Maini was ahead of his time. Original equipment makers (OEM) weren’t really interested in clean technology. However, all that changed with the 2008 downturn, along with the rise in oil prices, leading to OEMs taking electric vehicle technology seriously.

Making A Connection
So what makes the new Reva special? For one, it is a smart car. Think constant Internet connectivity, performance tracking by the company and up-to-date information on the car’s battery maintenance through the Cloud. Two, it converts solar energy into electricity. “This is what mobility means, being able to do more with your car,” says Maini. The car also comes with a quick-charge battery pack. When the main battery is weak, a 15-minute charge will let the car travel a further 25 km.

M&M has already filed more than 20 patents in the ‘connected’ car and electric vehicle technology segments. Reva’s production is currently supported by a ‘green’ plant — 35 per cent of its electricity needs come from solar panels — with an annual capacity to produce 30,000 cars. In the first year itself, the plant is expected to produce 5,000 units — more than what Reva has sold collectively till date.

In spite of all the technology, it is affordability which will be key to the new Reva’s success. Currently, it is the high cost of batteries which has brought the electric vehicles industry to its knees the world over. For M&M, it has not been possible to reduce the cost of the car as the battery alone adds up to a substantial portion — approximately $550 per kwh, the Reva needs a battery pack of 14kwh and a 25 NM AC ­induction motor. Lead acid batteries, though cheaper, are polluting when disposed of and were, therefore, not preferred.

Moreover, a lithium-ion battery lasts for only five years whereas a gasoline engine has a much longer life. Globally, this has gone against electric cars. However, increasing fuel prices and the need for a more green technology is what electric vehicle companies are banking on. “Scale, infrastructure support and good policy decisions will reduce the cost of these battery packs. The industry will mature in eight years,” says Kumar Kandaswami, director at Deloitte India. Deloitte predicts that five per cent of all new vehicles on Indian roads will be electric by 2020. India is expected to sell 6-7 million new cars annually by 2020; hence, the number of electric vehicles will be around 350,000 units. It adds that the first big shift in considering electric vehicles as an option will happen when petrol prices cross Rs 85 a litre.

“M&M will dominate this market because other automakers in India are yet to launch their electric vehicles,” says Shrawan Raja, managing editor of indianautosblog.com. He adds that Tata Motors and GM India have showcased electric vehicle technology, but are at least a couple of years away from having a mass production plan.

The Future’s Bright
For the electric vehicle industry to take off, positive government policies are a must. Currently, the Indian government is debating earmarking Rs 23,000 crore (including subsidies) for electric vehicle infrastructure. However, a clear policy is yet to be unveiled. Meanwhile, the Rs 1 lakh subsidy on the purchase of an electric vehicle, offered by the Centre for the past decade, has been scrapped. At present, only Delhi offers a subsidy of 15 per cent on electric cars. Compared to China and the US, where such subsidies can go up to $8000 and $7,500, respectively, India has some catching up to do.


In spite of unclear government policies, the corporate sector is showing interest in electric vehicles. Take, for instance, the SAP Labs India office at Whitefield, Bangalore, which has 40 Reva vehicles parked in front of the building. Even the managing director of SAP Labs India, V.R. Ferose, makes his rounds of the Whitefield campus in an electric car. The company has its own charging infrastructure set up by Reva. SAP encourages employees to purchase electric vehicles and pays 70 per cent of the EMI, along with insurance and road tax.

One of Maini’s strengths is the knowledge he has built up over 18 years in the electric vehicles industry. “We can offer consultancy services for OEMs to set up cost-effective plants and then licence our technology.”

A KPMG global automotive report released this year says the world of electric vehicles will change with convergence of various OEMs and will make the concept of a two tier (tier-1 and tier-2) global industry redundant. By 2025, the emerging and mature markets will converge in terms of customer requirements for quality, safety and reliability, as well as for vehicle segment shares between low-cost and premium. Such convergence will have major implications for OEMs such as M&M, which has already been testing various models of its product line for electric variants.

The Maxximo van, the Gio pick-up and the Verito have all been tested with electric variants. Even the Ssangyong line of SUVs for the global market and M&M’s own brand of SUVs in India are being tested for electric options. “There is a huge opportunity for sub-one tonne commercial vehicles going electric, since this segment is price-conscious and low maintenance costs are crucial for sales,” says Akshay Bhalla, managing director at Protiviti India, a consultancy. But, he adds, this will become a reality only if changes happen in urban and commercial transportation.

Globally, Nissan is betting big on the electric vehicle market and has invested over $5 billion on the Nissan Leaf, its electric car priced at $36,000. It’s focusing primarily on the US market, where it plans to produce 200,000 lithium-ion ­batteries and over the next three years sell 150,000 cars annually. Carlos Ghosn, chairman of the Renault-Nissan Alliance, asserts that by the end of the decade, 10 per cent of all car sales globally will be electric vehicles. Mitusbishi, too, has forayed into the US and European market with its i-MIEV, priced at $30,000, while premium electric vehicle maker Tesla Motor’s new sedan has just rolled out.

With electric vehicles slowly but surely gaining traction the world over, Maini’s time may have
arived. W­hile he focuses on the science, M­&M will help drive his dream.