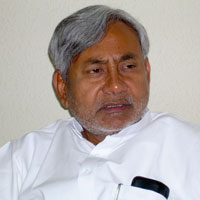 08 November, 2014
Print this article Font size -16+
Bihar Chief Minister Nitish Kumar resigned on Saturday (17 May) after his party JD(U) was routed in the recently concluded Lok Sabha elections. The 2014 Lok Sabha poll brought a windfall for BJP-led NDA which won 31 out of the 40 Lok Sabha seats in the state, while destroing the JD(U) and RJD.

Kumar is believed to have sought dissolution of Assembly for seeking fresh mandate, said sources.

The total tally of BJP and its allies was only one short of the 2009 figure when it contested under the leadership of Nitish Kumar in the state.

Besides, winning his own Hajipur seat, Ramvilas Paswan who had a pact with BJP in seven seats won six of them.

Its only losing candidate Satyanand Sharma at Nalanda also put up an impressive show in Kumar's home constituency of Nalanda but was humbled by Kaushlendra Kumar by only 9,627 votes.

RLSP of Upendra Kushwaha, friend-turned foe of Nitish Kumar, won all the three seats it contested.

Once a close aide of Lalu Prasad, Ramkripal Yadav who defected to BJP after denial of a ticket defeated Prasad's daughter Misa Bharti in Patliputra seat by over 40,000 votes.

The poll proved fatal for the JD(U) led by Bihar Chief Minister Nitish Kumar, who had taken a risk by breaking ties with BJP over elevation of Narendra Modi.

Many of its senior leaders like Sharad Yadav and state ministers lost but the party managed to win the Nalanda seat considered pocket borough of Nitish Kumar by a small margin of 9,627 votes.

JD(U) which had contested 38 seats and had an alliance with CPI in two seats won only in Purnea and Nalanda. Its candidate managed to come second only in four seats.

The poor run for Kumar continued even in the bypolls in five Assembly seats with the JD(U) winning only Kochadhaman seat. RJD won three seats.

The results in Assembly bypoll boded bad times for Kumar whose government managed to scrape through a trust vote with the help of 4 Congress MLAs and 4 Independents and a CPI legislator in the House of 239 where the magic figure was 122.

The elections was also a disappointment for RJD chief Lalu Prasad who was eyeing a comeback in the state politics after allying with the Congress.

RJD managed to retain its tally of 4 seats as it had in 2009, but the sad story for Prasad was that he failed to ensure the victory of wife Rabri Devi and daughter Misa Bharti in the Saran and Patliputra seats.

Ally Congress hoping to ride piggyback on Prasad could win only two seats of Kisanganj and Supual.

But, luck smiled for NCP whose General Secretary Tariq Anwar who won the Katihar seat by defeating BJP rival Nikhil Chaudhary by 1,14,740 votes.