Elderly parents get children's support in exercising the right to vote

Elderly parents get children's support in exercising the right to vote

Gwalior/Sonepat (Madhya Pradesh/Haryana) [India], November 3 (ANI): As voting began for bye-polls to fill several vacant seats in the Legislative Assemblies spread across 10 states on Tuesday, several heartening images of elderly being carried to polling booths by their children surfaced.
In Bhainswal Kalan, Sonepat a man carried his elderly father on his back to a polling booth to help him cast his vote in the by-election to the Haryana Assembly. 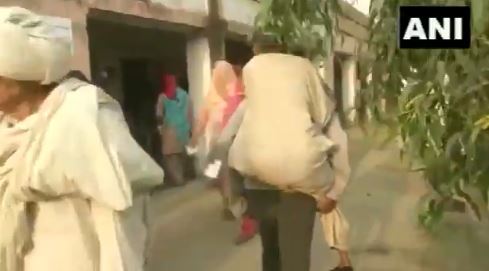 Similarly in Madhya Pradesh, where by-polls are being held on 28 seats, a man carried his elderly mother in his arms to a polling booth in Gwalior to enable her to cast her vote.
Polling is being conducted with precautionary measures in place against the novel coronavirus.
Nagaland has recorded the highest voting percentage at 58.18 per cent till 11 am, while Uttar Pradesh (18.49 per cent) the lowest among the 10 states in which by-polls are being held on Tuesday.
28 seats in Madhya Pradesh, 8 in Gujarat, 7 in Uttar Pradesh, 2 each in Odisha, Nagaland, Karnataka and Jharkhand, and one seat each in Chhattisgarh, Telangana and Haryana going to polls today.
Voting will be held from 7 am to 6 pm, except in Chhattisgarh, Jharkhand and Nagaland where the timings are different. Voters who are COVID-19 positive will be allowed to vote separately in the last hour.
Further, alongside the by-polls in 10 states today, polling for phase two of the Bihar elections is also underway.
The counting for the Bihar polls and by-polls in various states will be conducted on November 10. (ANI)