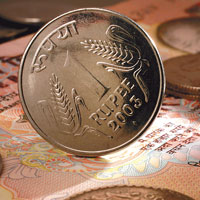 08 November, 2014
Print this article Font size -16+
A recovery in developed markets later this year will boost India's flagging economy, but growth will be lacklustre at best as the RBI refrains from cutting interest rates in order to keep a battered rupee currency from falling further.
The latest Reuters poll of over 30 analysts showed Asia's third largest economy is expected to grow 5.6 per cent in the fiscal year ending March 2014, compared to 6.0 per cent forecast in the previous poll in April.
The fiscal year ending March 2015 was forecast to show 6.5 per cent growth, down from a previous forecast of 6.9 per cent.
India, once considered a potential powerhouse for the global economy, has lost its sheen of late due to the slow pace of reforms, high inflation and a record wide current account deficit.
Growth slid to a decade low of 5 per cent in the last fiscal year.
"You'll have the euro zone probably moving out of recession later this year, growth in the United States we believe will pick up, growth in China will start to pick up as well, so India will see higher exports," said Jay Bryson, global economist at Wells Fargo Securities.
"But, we don't see it going back to where we were back before the crisis when India was consistently growing at seven, eight or nine per cent."
While the U.S economy is expected to pick up pace this year, Chinese growth is unlikely to gain traction next year as the government trades short-term growth for long-awaited reforms, according to other Reuters polls taken this month.
Having cut its policy repo rate three times this year, to bring the rate down to 7.25 per cent, the Reserve Bank of India is expected to leave rates unchanged until the October-December quarter, as it tries to bolster a rupee which hit a record low of 61.21 against the dollar last week.
"We have had to basically take out from our forecast a few of the interest rate cuts, which we previously anticipated would happen by the end of the 2013," said Hanna Luchnikava, economist at IHS Global Insight.
"Given this assumption we expect overall GDP growth to rebound only very slowly."
Speculation that the US Federal Reserve will begin tapering its mega-stimulus programme later this has hurt risky assets widely across Asia. Saddled with a record high current account deficit, the rupee has suffered the most among Asia's emerging market currencies.
On Monday, the Reserve Bank of India (RBI) raised short-term borrowing costs, restricted funds available to banks and said it would sell 120 billion rupees in bonds, effectively draining cash from the market.
The moves raised funding costs for banks and companies almost immediately, creating a ripple effect that could crimp growth in an economy expanding at its slowest in a decade.
"RBI's change in tack in the short term rates might carry some downside risks to growth," said Radhika Rao, economist at DBS in Singapore.
In a further move to attract foreign investment, India late on Tuesday eased foreign direct investment rules for several industries including telecoms and insurance, in the hope of attracting inflows that could reduce the current account deficit and put momentum in growth.