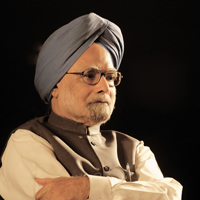 08 November, 2014
Print this article Font size -16+
India's economy may grow slower than previously expected 6.5 per cent for the year to March 2014, Prime Minister Manmohan Singh said on Friday. Singh, speaking at an industry event, said his government would unveil more reforms for foreign direct investment, but he gave no details.

India is committed to bringing its current account deficit under control and reducing demand for gold and petroleum products, he said. "We are committed to bringing the current account deficit under control by addressing the demand side and supply side of the problem. On the demand side we need to reduce the demand for gold and the demand for petroleum products, the two biggest components of our trade deficit," he told businessmen in New Delhi. "Gold imports declined sharply in June, and I hope they will stay at normal levels from now on," he added.
Admitting the economy was going through a difficult period, Prime Minister Manmohan Singh assured the industry that government will leave no stone unturned to ensure a rebound. "We will leave no stone unturned to ensure that the economy rebounds. I appeal to each one of you not to be overcome by negative sentiment," Singh said while addressing the annual meeting of industry body Assocham.

"Let me begin by stating upfront that we, like most other countries, are going through a difficult period... It (industry) is looking to the government to bring the economy back to a higher growth path. This is a legitimate expectation and is also upper most in our mind," he said.
The Prime Minister assured the industry the government will remain pro-active in ensuring economic rebound. "When things are going well, government should interfere as little as possible. When things go badly, as they seem to be at present, it is the responsibility of the government to become pro-active," Singh said.
Cause And Effect
Noting that the most immediate cause of worry is the recent volatility in foreign exchange markets, Singh said, much of this was due to global markets reacting to the likelihood of a withdrawal of quantitative easing by the US Federal Reserve.

"Large volumes of funds were withdrawn from emerging markets and there was a depreciation in many emerging market countries... We too experienced a sharp depreciation in the rupee. In our case, it was perhaps exacerbated by the fact that our Current Account Deficit (CAD) had expanded to 4.7 per cent of GDP in 2012-13," he said.

On petroleum sector, he said, rupee depreciation has to some extent neutralise the calibrated steps to reduce under- recoveries of the oil marketing companies. However, he added, "our policy of adjusting prices to progressively eliminate under recovery remains".

On the supply side, he hoped, depreciation of rupee would give push to export efforts and added, the government has been trying to remove the constraints in export of iron and other ores which saw a considerable decline over the last one year.

RBI Steps Not To Result In High Interest Rate
The Reserve Bank's tough measures to arrest rupee's fall will not translate into higher interest rate and the steps will be reversed with easing of speculative pressure on domestic currency, Singh added.

"Once these short term pressures have been contained, as I expect they will be, the RBI can even consider reversing these pressures," Singh said while addressing the annual meeting of industry chamber Assocham.

The Reserve Bank earlier this week announced a slew of measures like raising cost of borrowing by banks by 2 per cent to 10.25 per cent and announcing sale of bonds worth Rs 12,000 crore through open market operations to suck liquidity to check sliding rupee which hit a life time low of 61.21 to a dollar.

Singh said the RBI has done its bit to stabilise market expectations. Rupee, which plunged to a record low on July 8 has lost 7.3 per cent this year. The currency was trading at 59.84 per dollar in early trade. Singh said the volatility in exchange rate was caused due to concerns over withdrawal of quantitative easing by the US.

"The most immediate cause of worry is the recent volatility in foreign exchange markets... Large volumes of funds were withdrawn from emerging markets and there was a depreciation in many emerging market countries, including Turkey, Brazil and South Africa," he said.

Singh said the impact on Indian currency was felt more as the country's current account deficit (CAD) was high. "I expect that the CAD in 2013-14 will be much lower than the 4.7 per cent level recorded last year. It will decline further next year," he said.
"Looking ahead, the rupee depreciation will help Indian industry to compete effectively with other countries, both in export markets and against their imports in our markets," Singh said. Talking about the RBI recent initiatives to arrest rupee decline, Singh said, these steps were not meant to signal increase in long term interest rates.

"They are designed to contain speculative pressure on the currency. Once these short term pressures have been contained, as I expect they will be, the RBI can even consider reversing these pressures," he said.

Singh further said that the government is on way to conclude a free trade pact with the European Union and hoped that industry would take advantage of the agreement to increase its competitiveness. India has already signed free trade agreements with Korea, ASEAN and others.

On CAD, Prime Minister said, the government and RBI will use all policy instruments available - fiscal, monetary and supply side interventions -- to reduce it.

"Ideally we should bring the CAD down to 2.5 per cent of GDP. It is not possible to do this in one year, but I expect that the current account deficit in 2013-14 will be much lower than the 4.7 per cent level recorded last year. It will decline further next year," Singh said.

The PM further said that the government would stick to the fiscal consolidation road map and restrict the deficit to the target of 4.8 per cent of the GDP in the current financial year.