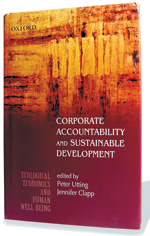 These books are part of a series edited by Joan Martínez Alier and Pushpam Kumar on economical economics and human well-being. The series aims to evoke and bring together debates on topics related to ecology.

Everyone has heard of corporate social responsibility (CSR), but corporate accountability is a relatively new term. The idea behind it is that corporations should do much in the interest of sustainable development, and will not do it out of self-interest or volition. CSR, which implies voluntary action by corporations, is impractical; they have to be forced to sustain development. Corporate accountability is a mild or polite way of saying they should be so forced. Stefano Pogutz spells this out in the first book.

Arild Vatn lists some ways in which they could be so forced: companies may undergo a periodic social audit, and must always hold enough idle funds to ensure that if they fail the audit and are made to close down, their workers can continue to receive wages for some time. Or socially virtuous people or organisations should get free part-ownership in companies, and should be entitled to two sets of final accounts besides the usual ones — namely one in terms of the companies' social impact and another in terms of their environmental impact. If they make losses on these accounts, they must be closed down. Or, finally, companies should be nationalised or communalised. Peter Utting considers the use of law against erring companies, and reviews its success in this role. He mentions a number of international conventions that conflict with eco-friendly national legislation.

The rest of the book consists of case studies. One by Jennifer Clapp argues multinational corporations have not been too careful about accidentally releasing genetically modified organisms. Runa Sarkar in her study of Indian paper and steel makers infers that environmentally virtuous action, such as it was, was driven in government enterprises by fear of judicial activism and public opinion. In private industry, it was driven by international benchmarking.

Prabha Pant and Rahul A. Shastri get results from extensive statistical analysis of Indian factories that they cannot explain or do not like; so they conclude that the factories falsify returns. They omit the possibility that pollution inspectors are corrupt, or that the correlations or lack of them are too insignificant to require explanation. Maria Loureiro finds that countries that signed oil spill conventions had less serious spills.

The second book, Science for Policy, proceeds from a premise that we are in an era of "post-normal science" — that so-called scientific facts can be uncertain and controversial. When such facts form the basis of environment policy, some form of public negotiation is necessary to establish the most acceptable factual framework and the most practical policy conclusions.

In another paper, M.V. Ramana and J.Y. Suchitra review India's nuclear energy record and plans. Their description of the record is correct and devastating: the Indian government has been hamhanded in its development of nuclear power even by its own standards. But the main argument for nuclear energy in India is that no other energy is going to be available in sufficient quantities in a few decades; nuclear energy is India's answer to Giampetro's question. It would have been fruitful if the two had connected.

Nicholas Stern tackled precisely those problems for Britain; his report is reviewed by Paul Baer and Clive L. Spash. They make the obeisance to "post-normal science" that seems customary in the group that wrote this book. Their objections to Stern are perfectly comprehensible and reasonable without it. They amount to saying that Stern is not pessimistic enough. All they have to do is to repeat his calculations with a lower discount rate.

Although these books sometimes sound like scriptures of a cult of Gaia worshippers with one devil, called the economist, the believers are intelligent and often intelligible people. They are worth reading by all interested in the future of the world beyond our lifetimes.

Authors' Intro:
Peter Utting  is deputy director at the United Nations Research Institute for Social Development, where he also coordinates a research programme on markets, business and regulation.

Jennifer Clapp is professor, environment and resource studies at the University of Waterloo, Ontario, Canada. She is co-editor of the journal Global Environmental Politics.

Angela Guimarães Pereira and Silvio Functowicz are researchers at the European Commission's Joint Research Centre at the Institute for the Protection and Security of the Citizen (IPSC) and Knowledge Assessment Methodologies Group respectively.