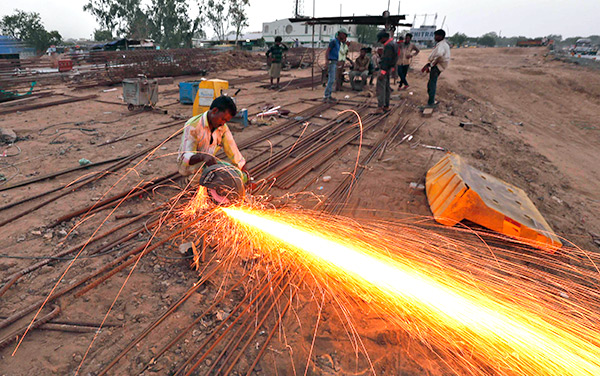 08 November, 2014
Print this article Font size -16+
The Economic Survey for the year 2013-2014 projected the GDP growth at 5.4-5.9 per cnt for the current financial year while sounding dire warning about the fiscal deficit.

"Economy can look forward to better growth prospects in FY15," the survey said. The country's GDP for the fourth quarter of the financial year 2013-2014 grew at 4.6 per cent. The GDP for the entire FY14 grew at 4.7 per cent. This marks a second straight year of sub-5 per cent growth - the worst slowdown in more than a quarter of a century.

Adding to the growth challenge is an adverse global economic climate that is hemming in the country's exports growth. The sector accounts for nearly a quarter of the domestic economy.

Equally worrisome are the prospects of below-average monsoon rains this summer, which could hit farm output and fuel inflation. That would make it tougher for an inflation-focused RBI to lower interest rates to support growth.

India's fiscal situation is worse than it appears, pointed out the Economic Survey and called for tough measures to shore up public finances and reduce inflation.

Kuntal Sur, Partner, Financial Risk Management, KPMG in India, says “this year’s Economic Survey for the first time covers FRBM Act and the need for a framework to target CPI inflation -  clearly indicate fiscal consolidation and inflation control are the two key objectives for the new government. The survey also deals with moderating food inflation through common market for agricultural commodities, decentralized procurement for PDS and review of fertilizer subsidy. We can expect tom’s budget to have a detailed roadmap on these areas. Survey also expects FY 15 GDP growth of 5.4-5.9 per cent, however, a downside risk exists if monsoon is below normal.”

The survey recommended tackling food and fertiliser subsidies to lower spending, while broadening the tax base. Tax collection is less than 9 per cent of gross domestic product, about a quarter of the average in the OECD group of developed nations.

The tone of the report is bound to increase speculation that Finance Minister Arun Jaitley will announce a higher fiscal deficit target in his maiden budget, which he presents to parliament on Thursday.

"The Economic Survey 2013-14 conveys a sense of urgency about the course the economy needs to undertake," Arvind Mayaram, the finance ministry's top bureaucrat, wrote in a foreword of the report.

Prime Minister Narendra Modi-led NDA government has taken over an economy in shambles. Ailing with a decade low sub-5 per cent economic growth and above-comfort inflation, the new government is faced with the daunting task of repairing an economy without the luxury of enough revenue in its coffers.

The balancing act between fiscal prudence and stimulating growth is tough one to pull off, and all eyes are now on Jaitley's maiden budget to provide some direction to an economy in doldrums.

R. Sivakumar, Head of Fixed Income, Axis Asset Management, says "I think it's reasonable (regarding the GDP growth estimate). There is some evidence of an industrial growth pickup, so I don't think they are too far off the estimates. Over the last few years we have seen the quality of expenditure deteriorate, i.e. higher amount of subsidies and lower amount of capex and planned expenditure, as well as the tax-to-GDP ratio stagnate. We will have to wait until tomorrow to see what actions are taken on these steps. They are talking about removing or amending laws, which allow government interference of markets. These clearly reflect the new government's pro-business outlook. From the budget what we expect to see is something where they adhere to some form of discipline, not make more announcements which they cannot achieve."

A. Prasanna, Economist, ICICI Securities Primary Dealership, says "It's definitely reassuring to know that the finance ministry and RBI are on the same page when it comes to inflation. They are speaking in one voice about the need for inflation (CPI) targeting as a key to promoting growth of the economy,"

Rupa Rege Nitsure, Chief Economist, Bank of Baroda, says "It is a highly realistic survey in its assessment of economic stresses and fiscal challenges. Given the unique political setting of stability that India enjoys today, it is highly probable that many of its recommendations will actually get implemented in the budget tomorrow."

Nirakar Pradhan, Chief Investment Officer, Future Generali Life Insurance, says, "the focus on fiscal consolidation and inflation shows the government's focus on the two main risks for the Indian economy. "Going forward, if monsoon behaves, there will be nothing to worry about. 2014/15 GDP growth pegged between 5.4 to 5.9 per cent is good, as it shows we will break the trend of sub-5 percent growth rate seen over the last 2 years. One should expect GDP growth to reach about 8 percent in the next 2 years."

According to Heritage’s Economic Freedom Index, India scores very poorly in business and investment freedom (ranked 171st and 142nd, respectively). Launching a business takes more than 25 days on average. Licensing requirements cost almost 10 times the average annual income. (Modi was successful in streamlining licensing requirements in his home state of Gujarat.) There are many bureaucratic barriers to foreign investment. The state retains considerable ownership in the banking sector, and all domestic banks are required to do priority sector lending as directed by the government.

So for the 63-year-old Prime Minister has offered the Indian economy positive signals. He has already approved a number of infrastructure projects and appears to be moving quickly on trade diplomacy. But much real work remains to be done.

With budget deficits running at an estimated 4.1 percent of GDP in the current fiscal year (India has not run a budget surplus since independence in 1947), Modi must move aggressively in improving government finances. According to a senior government source, the finance ministry plans to raise up to a record $11.7 billion through asset sales. There are also expectations the first budget will trim subsidies for petroleum products, which currently cost taxpayers some $40 billion a year. With only 3 percent of Indians paying income taxes, the tax base will have to be broadened. While tax reform plans include a goods and services tax, it may take until next year to be implemented.

It is hoped that labour market reform will occur sooner rather than later. India’s working-age population of 750 million is expected to increase by 230 million by 2030, so job creation is India’s greatest long-term challenge. Lifting foreign ownership ceilings and enacting tax reform would go a long way in attracting more foreign capital. Many foreign investors have been deterred by tax disputes, such as that embroiling Vodafone. Government meddling in the labour markets will have to be curtailed.  Requiring government approval to lay off employees in firms with more than 100 workers discourages the large scale enterprises that India needs.

The timing could be just right for Modi to be bold in these areas and others. Labour costs have been rising rapidly in China; Japanese firms are shifting production from China because of military tensions; and the weakened rupee (until recently) has made exports more competitive. The Americans want a stronger India to offset China’s regional might and bullying, and Washington could be a valuable ally in India’s cause in areas of trade and investment policy.

Modi will not be able to work miracles overnight in a nation with so many economic obstacles to overcome. These are problems that have been allowed to fester for want of political will. But his first budget can be a great start.
Tags assigned to this article:
economy budget gdp top 1 economic survey budget deficit budget 2014 budget 2014-15