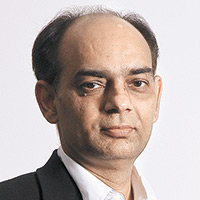 08 November, 2014
Print this article Font size -16+
When promoters set up companies, one of their goals, if not the main goal, is creating wealth for themselves. Many such companies fail or, at the most, remain under-achievers. Only a few really stand out. What is it that sets apart the companies that go on to create immense wealth, not just for the founders, but for multiple generations of the founding families?

Take, for instance, Asian Paints. Founded in 1942 as a partnership firm, it is now India’s largest and Asia’s third-largest paint company. Since 1967, when it acquired market leadership, it has consistently strengthened its lead. Today, it is double the size of any other paint company in India. It has been sensitive to consumer needs and has innovated consistently, helping it stay ahead.

Hero MotoCorp, which began in 1984 as a joint venture between Hero Cycles and Honda of Japan, became the world’s largest two-wheeler company in terms of annual sales volume in 2001. It retains this position till date, three years after Honda’s exit. Obviously, it was not the tie-up with Honda that led to Hero MotoCorp’s success, though it was a significant contributor. From a small business of bicycle spare parts that they started in 1944, the Munjals have come a long way.
Both the firms are focused, leaders in their respective sectors, and have strong brands. They have repeatedly featured as Consistent Wealth Creators in Motilal Oswal’s annual wealth-creation studies. Here, wealth creation is defined as the increase in market capitalisation over the immediately preceding five years, after adjusting for equity dilution.

Quality of management is a key factor behind consistent wealth creation. This is further amplified by the role of management strategy in creating and/or defending a company’s ‘economic moat’, which protects its profitability from being eroded by competitive forces. Conversely, the stock market’s perception of ineffective management (including poor corporate governance, capital misallocation, consistent failure to deliver on guidance, low dividend payout) is a major source of wealth destruction. When the market is disappointed, it does not spare even those stocks that were its darlings till recently.

The pace of wealth creation is singularly decided by the quantum of earnings growth. Earnings growth, in turn, has a very high correlation with sales growth, as margin expansion is not sustainable over long periods. Even as earnings growth is important, markets also have a keen eye for the depth of a company’s competitive advantage (or economic moat) and its sustainability.

The depth of a company’s economic moat is reflected in its return on equity (RoE) relative to peers and its sustainability in its competitive advantage period. Interestingly, since markets are efficient, in most cases, the quality of the economic moat is priced in. Given this, it is the deepening or narrowing of the moat (or incremental RoE) that influences stock prices more than the absolute levels. Price-earnings multiple (or ratio) has a high and positive correlation with dividend payouts which, in turn, have a high and positive correlation with RoE. High payouts coupled with growth are a potent combination for wealth creation, as it reflects several things: (1) The firm’s business is intrinsically highly profitable, and it needs to retain very little of its annual profit to fund future growth; (2) The management has an attitude of sharing economic benefits with minority shareholders; (3) Low risk of misallocation of retained earnings in unrelated diversifications, risky overseas acquisitions. At a more fundamental level, the likelihood of a company to consistently create wealth is a function of its longevity.