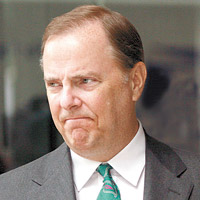 08 November, 2014
Print this article Font size -16+
Jeffrey Skilling, the former Enron CEO, could be freed from prison nearly a decade too soon. The step-down is part of an agreement with federal prosecutors to end the last major legal battle over one of the biggest corporate frauds in US history. The agreement calls for reducing Skilling’s  2006 federal prison sentence from 24 years to just 14. This could see Skilling being freed in late 2018. In exchange, the 59-year-old, who has long maintained his innocence, has agreed to stop appealing his conviction. The agreement will also allow more than $40 million seized from him to be freed up for distribution to Enron fraud victims. The resentencing came after a federal appeals court upheld Skilling’s conviction but found the original sentence too harsh.

BRIC Power: Brazil’s Roberto Azevedo will replace France’s Pascal Lamy as the chief of the World Trade Organization (WTO) in September. He will be the first candidate from the BRIC (Brazil, Russia, India, China) club of emerging economies to take the job. The 55-year-old career trade diplomat faces the huge challenge of reinvigorating the global body, which has failed to wrap up the Doha trade liberalisation talks after years of stalemate and risks becoming irrelevant without a breakthrough. As Brazil’s ambassador to the WTO, Azevedo had exhibited his ability to listen to all sides in a negotiation and to find solutions by quietly building consensus. Hope he will continue doing that when in charge of the WTO.

Tax Holiday: Large US companies boosted their offshore earnings by 15 per cent last year to a record $1.9 trillion, having avoided hefty tax bills by keeping profits abroad, according to research firm Audit Analytics. The overseas earnings stockpile climbed 70 per cent over the past five years, it said. US-based MNCs do not have to pay corporate income tax on foreign earnings as long as those do not enter the US. Accounting rules also let companies avoid recognising a tax expense if their management intends to keep the earnings reinvested overseas.

Cyber Charge: In the latest in a series of rhetorical skirmishes between the US and China on the issue of cyber attacks, Pentagon has accused China of trying to extract sensitive information from US government computers. The comment, made in an annual report, seems to be the harshest and most detailed set of accusations thus far. The Pentagon has slammed China for carrying out the attacks to extract information from “diplomatic, economic and defence industrial base sectors that support US national defence programmes” to bolster its own defence and industries.

iBudget: Pegatron Corp, an assembler of Apple Inc.’s iPhone and iPad, has said that it would increase its number of workers in China by 40 per cent in the second half of the year, fuelling speculation about a new cheaper iPhone. Pegatron currently employs 100,000 workers. Suppliers say that Apple is developing a cheaper model of the phone with an eye on the lower-income buyers in growth markets such as China and India.

Divine Deal: The regulator of the Vatican bank has signed an information-sharing pact with the US agency that tracks suspicious financial transactions. The deal is part of an effort by the scandal-ridden bank to improve its international image. The bank, known as the Institute for Works of Religion (IOR), mostly manages money for dioceses and religious institutions and has traditionally been isolated from the international regulatory system. It has been rocked by three decades of scandals, including the 1982 incident in which Roberto Calvi, an Italian known as “God’s Banker” because of his Vatican ties, was found hanged under London’s Blackfriars Bridge. The Vatican says the agreement is meant to “foster bilateral cooperation in the exchange of financial information” with the US.

Recall Again: BMW is recalling about 220,000 vehicles worldwide from model years 2002 and 2003 as part of a wider recall due to faulty airbags made by supplier Takata Corp. The latest recall includes its 3-Series sedans, coupes, convertibles and station wagons. In April, 3.4 million vehicles worldwide made by Toyota, Nissan, Honda and Mazda were recalled because of faulty airbags by Takata, the world’s second-largest maker of airbags and seat belts. BMW expects to have repair parts for the recalled vehicles in July.

Battle’s Not Over: Malaysia’s governing coalition won a tight national election in May to extend its 56-year rule, fending off an opposition alliance that pledged to clean up politics and end race-based policies in the country. But the election result has sparked off a battle within the ruling Barisan Nasional (BN) that is likely to slow PM Najib Razak’s drive to reform the economy and roll back policies favouring majority ethnic Malays. BN now faces a leadership election in October or November, which is likely to be fought between traditional and reformist wings.
----------->
"Google pays very little tax in France, Germany and Britain on its profitable ad business, prompting the three to contemplate action against it"

Cuts & Trims: French banks Societe Generale and Credit Agricole are planning to further cut costs after asset sales and lending cutbacks have helped offset a weak domestic economy in the first quarter. Several banks across Europe are also moving to slash spending and cut jobs in the face of tougher rules about capital levels and the uneven post-crisis economic recovery. SocGen says it will cut €900 million in costs over the next three years, while Credit Agricole has said it will cut €650 million by 2016.

Search Is On: Lawmakers are catching on to Google’s attempt to minimise taxes. German and French politicians are joining their British peers in seeking action against Google’s alleged tax evasion. The move  follows reports on how the firm employed sales staff in the UK while claiming that sales were actually made from Ireland. The search engine’s logic was that its London staff did not sell to UK clients, but only provided marketing and support services to Google Ireland, like they did in France and Germany — making its presence there almost tax-free.