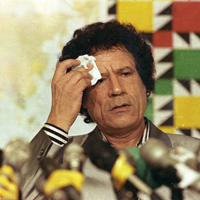 They also underlined the importance of ensuring the unity and territorial integrity of Libya.

The GCC-EU positions were spelled out in the joint communique of the 21st session of the Joint Council for the European Union-GCC, held in Abu Dhabi.

The two sides also expressed their deep concern at the situation in Yemen.

They reiterated their commitment to support Yemen's development as a unified, stable, democratic and prosperous state. They called on all parties in Yemen to urgently forge a meaningful, comprehensive and inclusive agreement on political transition.

The two sides also urged Iran to play a constructive role in the region and to cease interfering in the internal affairs of GCC member states and other countries in the region.

The ministers called on Iran to fulfill its obligations under international law to provide protection for diplomatic missions in the country.

In a statement released to the UAE's official news agency WAM, the EU and the GCC stressed their common position that Israeli settlements anywhere in the occupied Palestinian territories are illegal under international law and constitute an obstacle to peace.

"They called on Israel to immediately end all settlement activity in East Jerusalem and the rest of the West Bank, including natural growth, and dismantle all outposts.

They agreed on the need to continue to support Palestinian state-building efforts, both politically and financially," the statement said.