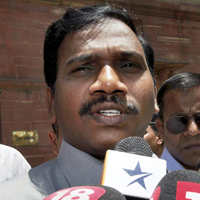 08 November, 2014
Print this article Font size -16+
Former Telecom Minister A Raja, DMK MP Kanimozhi and 17 others were today chargesheeted in a special court by the Enforcement Directorate in connection with a money laundering case relating to the 2G spectrum allocation scam.
ED in its charge sheet also named DMK Supremo M Karunanidhi's wife Dayalu Ammal, Swan Telecom Pvt Ltd (STPL) promoters Shahid Usman Balwa and Vinod Goenka as accused in the case in which it alleged that Rs 200 crore was paid by STPL promoters to DMK-run Kalaignar TV.
The final report names 10 individuals and nine companies as accused in the case and the ED has chargesheeted them for the offence of money laundering under the provisions of Prevention of Money Laundering Act (PMLA).
Directors of Kusegaon Fruits and Vegetables Pvt Ltd, Asif Balwa and Rajiv Aggarwal, Bollywood producer Karim Morani and Kalaignar TV Managing Director Sharad Kumar have also been named as accused in the case.
Raja, Kanimozhi, Shahid Balwa, Vinod Goenka, Asif Balwa, Rajiv Aggarwal, Karim Morani and Sharad Kumar are also facing trial in the 2G scam case in which CBI had earlier filed charge sheets.
The ED's charge sheet was filed before Special CBI Judge O P Saini by Special Public Prosecutor Naveen Kumar Matta who said that the agency has investigated the "flow of funds" and they have found that money was laundered by these accused persons.
The judge fixed the charge sheet for consideration on cognizance for April 30.
ED claimed to have found evidence with regard to the channelling of Rs 200 crore to Kalaignar TV through a circuitous route.
Dayalu Ammal was holding 60 per cent stake in Kalaignar TV while Kanimozhi and Sharad Kumar each were holding 20 per cent stake.
Raja and Kanimozhi were earlier questioned by the agency in the case.
The ED had earlier also scrutinised documents related to both the DMK MPs incomes, properties and personal investments.
It had also initiated attachment proceedings under PMLA against other individuals and certain telecom firms involved in the case.