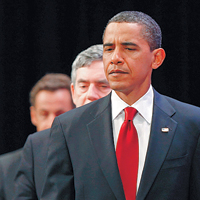 The leaders of G20 countries were in a good mood — or maybe their sherpas cheered them up. For their Summit statement starts with a pinch of self-congratulation; the way they put it, "When we last gathered in April, we confronted the greatest challenge to the world economy in our generation. Global output was contracting at pace not seen since the 1930s. Trade was plummeting. Jobs were disappearing rapidly. Our people worried that the world was on the edge of a depression. At that time, our countries agreed to do everything necessary to ensure recovery, to repair our financial systems and to maintain the global flow of capital. It worked. Our forceful response helped stop the dangerous, sharp decline in global activity and stabilize the finance markets."

The elation is understandable. Dangerous contractions take place once in a lifetime. Leaders last much less long. So a world-class depression is something a leader is unlikely to experience. Stopping one in its tracks is even more exceptional; so the leaders' upbeat mood is not surprising.

But as Manmohan Singh reminded them, one stimulus does not make a boom. They have therefore agreed to continue to stimulate their economies. The Prime Minister's advice, however, would need to be taken with a pinch of salt. For stimulus is just another name for a fiscal deficit — for spending more than the government receives in revenue. Our government does so most casually, for it owns most of the banking system. If it cannot raise the money by borrowing from the market, it can always force its loving daughters, the government banks, to lend it money. If even its banks do not have the money, the government can borrow from the Reserve Bank of India. When it spends the money, the total money supply will go up, people will have more money in their bank accounts than they need, and they will spend it. That will generate inflation. But the government is perfectly comfortable with that; 5 per cent inflation is considered normal, and anything under 10 per cent is nothing to worry about.

Industrial countries, however, run their finances in a more responsible manner. If their governments have to run fiscal deficits, they borrow from the market to finance the deficits. That would raise the ratio of their public debt to national income; they would have to spend a higher proportion of their revenue to pay interest, which is purely unproductive expenditure. They would hope that a boom would come soon and raise their revenue, and that they would be able to pay off their debt from the surplus revenue. But that hope depends on an early return to prosperity.

That is precisely what is not guaranteed in the present circumstances. The G20 leaders said that they had avoided a depression of the 1930s' scale. But they dare not say that they have ensured that a boom on the 1960s' scale would soon arrive. And if it does not arrive, the debt ratio might rise further, and debt may approach unsustainable levels. The only way out then would be to create hyperinflation which would make a bonfire of all debt, public and private. And that would wreck chances of steady growth for a long time to come. This is not just economic imagination run wild. It actually happened to Germany after World War II, and led to the rise of Nazism. And many industrial countries saw a sharp spurt in inflation and many years of sluggish growth after the oil crisis of 1973.

Economics affects politics sooner or later. The G20 countries are democracies; all their leaders will be facing elections in the next four or five years. Unlike in India, tax rates and inflation are serious election issues in many countries; leaders who raise taxes or inflation are much less likely to bring themselves or their parties back to power.

So there are limits to how far G20 countries can continue to stimulate their economies; if they run against those limits before autonomous growth revives, they may continue to face stagnation without having the weapon of deficit financing available for use against it. And G20 accounts for four-fifths of world's income; if G20 countries go into stagnation, so will the world.

The Prime Minister may not worry about what happens to the world; but he must worry about what would happen to India, which as he pointed out, is not immune to international trends. If the world goes into a downturn, India's balance of payments would worsen even further. The only way India would then be able to grow would be by substituting domestic production with imports. The Prime Minister should give some thought now to policies for replacing imports efficiently.