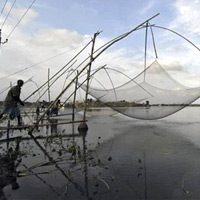 Japan's official weather bureau said on Friday its climate monitoring data and models indicate the El Nino phenomenon has emerged and is likely to last until the northern winter, potentially adding strain to global food supplies.

Global food production can suffer widespread disruption from the weather caused by El Nino, particularly across Asia and Africa where harvests can be robbed of rain.

"(Monitoring data for July) suggests that the El Nino phenomenon has emerged," the Japan Meteorological Agency agency said, referring to the latest conditions in the equatorial Pacific.

"The chances are high that the El Nino phenomenon will be maintained until the winter," the agency said in a statement on its website.

Indian Concerns
While the arrival of an El Nino raises the chances of favourable planting conditions in South America, it can roil farmers in Asia and Africa where it can bring extended dry periods.

Its effects will be closely watched in India, where the slow development of monsoon rains has already hampered the planting of summer crops, such as rice, oilseeds and cotton, and weather forecasters have already warned of the first drought in three years.

Three years ago, an El Nino slowed development of the monsoon rains, sparking a rally in sugar prices to 30-year highs as India, the world's second biggest producer, harvested a poor cane crop.

On Watch
The US Climate Prediction Center, part of the National Oceanic Atmospheric Administration (NOAA), warned on Thursday that an El Nino was almost certain to occur over the next two months.

The last severe El Nino was in 1998, when the phenomenon caused more than 2,000 deaths and inflicted billions of dollars in damage to crops, infrastructure and mines in Australia and other parts of Asia.

The Japanese agency had said last month the chances were high that El Nino conditions would emerge in the northern summer. Japan's summer usually ends in August and winter starts

El Nino is a warming of sea-surface temperatures in the equatorial Pacific that occurs every four to 12 years, affecting crops from Asia to the Americas as well as industries, including hurricane-vulnerable oil refineries in the US Gulf.

Keenly watched by the US oil industry, the phenomenon may reduce the chances of storms forming in the Atlantic basin towards the end of the hurricane season that runs to Nov. 30.

El Nino, which means "little boy" in Spanish, was first noticed by anchovy fishermen in Latin America in the 19th century.