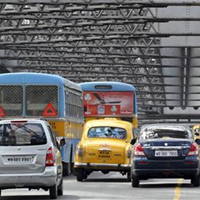 08 November, 2014
Print this article Font size -16+
The automobile industry is a darling of market watchers and is often seen as a barometer of the economy. A month-on-month fall in average sales is cause enough for a feeling of doom and gloom about the economy. For falling sales, car makers are held responsible for coming up with faulty strategies. But it is not only that the cars are not selling; real estate deals are also not getting signed; nor are the properties being completed on time. There is a correlation between the automobile and real estate sectors.

According to real estate consultants Jones Lang LaSalle, 2012 remained an inactive year, affecting all the major sectors in real estate. Office space absorption remained lower when compared to 2011. A JLL report adds that the retail segment itself faced challenges of quality supply, affecting the overall absorption. Despite the residential demand improving, developers continued to struggle with unsold inventories.

“As per RBI, government policies will focus towards growth in 2013, although risks of inflation will continue to remain,” says Ashutosh Limaye, Head of Research at JLL. He says that interest rates are expected to witness a downward correction of 100 to 150 bps in 2013 and this could help.

“The softening of interest rates is expected to reduce home loan rates, in turn increasing the buying of real estate assets,” he adds. The JLL report says that increasing urbanisation and consumption despite the slowdown in GDP growth will be the key drivers of the economy in 2013. There appears to be a problem in the strategy of real estate developers as well. But actually, both the automobile and the real estate sectors are affected by macroeconomic factors.  A look at the SIAM data for the last financial year shows automobile sector actual grew, albeit only by 2.61 per cent. We sold a total of 17,815,618 units when compared to 17,361,769 units in 2011-12.

The passenger car segment grew by 2.15 per cent, the three-wheeler segment grew by 2.90 per cent and the two-wheeler by 2.90 per cent. It was the commercial vehicle industry that fell by 23.18 per cent while the light commercials fell by 2.02 per cent. Perhaps the only market which saw a double digit growth of 13 per cent with 14.5 million cars sold last year was the USA. Other markets too saw some growth.  Russia grew by 10 per cent; China by 2 per cent and Brazil by 3.5 per cent.

“There is a slowdown for various reasons in India, one is the fuel debate, second is the interest rates, thirdly the salary hikes have been low and lastly the cost of inflation has hit the economy hard,” says Kumar Kandasami, Director at Deloitte Touche and Tohmatsu. He adds that once policy matters are sorted out, the automobile industry will bloom again. Analysts also add that the fuel debate created a capacity constraint with vendors who would have been ready for petrol parts, but had to change their entire strategy for diesel cars.

In the coming year, Ford, the Renault Nissan Alliance and Honda are betting big on the market with launches such as the EcoSport, Datsun and the Amaze. The Honda Amaze has already hit the market with a diesel engine that claims to hit 25 kilometres to a litre. The country will see fuel-efficient engines and cars that are extremely price competitive. The general prediction from SIAM is that the country’s auto industry will grow by 5 per cent this year. The mileage game will play a major role in the branding of cars. The Ford EcoSport has been pegged to be both fuel efficient and claims to offer build quality atvalue. “We are already expecting a great interest from customers about the car in our dealerships and the marketing activity for the EcoSport has begun,” says Anurag Mehrotra, VP Marketing at Ford India.

In the light commercial vehicle segment, companies like Ashok Leyland, Tata Motors and Force Motors are expecting a 15-20 per cent growth. “We are already expanding our capacity and will release a new variant of the Dost soon,” says Dr V Sumantran, Executive Vice Chairman of Ashok Leyland in Chennai. The company is currently ramping up its dealerships 100 touch points to 200.

Does one have to worry about the growth of the automobile industry for this year? “If one feels the economy is slowing, the sentiment itself can slow car sales. But this year we will see growth but not at the levels that we saw in 2010,” says Akshay Bhalla, MD of Protiviti India, a consulting firm.

The only worry, according to analysts, is the state of the economy and the coming election year, which can bring the industry to a grinding halt. However, one must not forget that all the capacity that India has added can actually make OEMs use it for exporting cars to new markets. But exports grew negatively by 1.34 per cent last year. The macroeconomic numbers game will keep the industry guessing. May be there will be a few surprises because it was in the election year 2009-10 that the industry grew by 30 per cent.