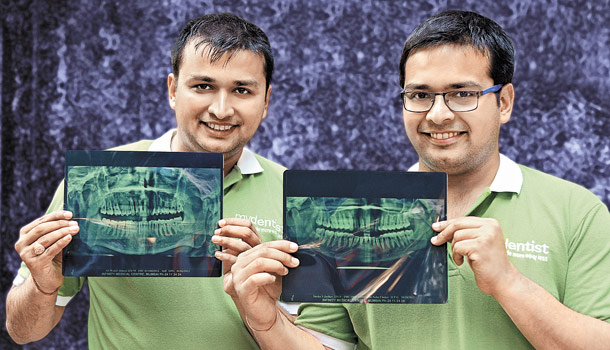 08 November, 2014
Print this article Font size -16+
Sometimes ideas are born out of boredom. That is what happened with the Vora brothers — Vikram (34) and Parth (31), owners of dental chain mydentist.

After graduating in engineering and completing an MBA in marketing, Vikram went to the US in 2003 to work with Southside Pharmacy in Houston. After returning to India a year later, he worked with Lionbridge Technologies for two years, and with ICICI Bank for a further two. Soon, the routine of jobs got to him. His brother Parth, who was working with Aptiva Consulting, was also looking for a change. The two quit their jobs, and started their own dental material trading company.

Then fate came calling in the form of a few unsold dental chairs. Why not start 4-5 dental clinics using the chairs, the brothers thought. And thus was born Total Dental Care. Every evening, dentists who used their space and services, shared their earnings with the brothers.

Around that time (2010), they met Anand Lunia, Vikram’s ex-boss from Lionbridge Tech, who was then working with Seedfund, a venture capital firm (he now runs his own PE fund, India Quotient). Lunia’s first piece of advice was that they close down all five units as there was no scalability option and sustainable revenue flow. The brothers shut down Total Dental Care, and started a new venture, mydentist. Seedfund signed up for Rs 8 crore, of which the initial Rs 1 crore was given from the incubator fund. They brought in expert advisors and designers like R. Sriram, the former founder CEO of Crossword, to design the logo, interiors and branding for the dental chain. Now mydentist is the largest dental chain in Mumbai with 40 clinics, employing 450 people, of whom 150 are dentists.
It targets the average middle class with quality dental treatment, and transparent treatment procedures and pricing across all its clinics. Each clinic occupies just 300 sq. ft, has two dental chairs, related machines, and is manned by two doctors. Consultation and X-rays are free. The patient can go for follow-up treatment to any clinic in the chain. It is a simple hub-and-spoke model with multiple clinics and profit centres fed by a central office, which is located in a 4-5 km radius from clinics.

“We pioneered the concept of dental brace treatment on instalments,” says Vikram.

Return on investment takes 18-20 months for a clinic with an investment of Rs 30-35 lakh. Each clinic has an EBITDA (earnings before interest, tax, depreciation and amortisation) of 20-24 per cent, says Vikram. The chain’s potential is attracting competition — Chennai-based VV Dentistree, Narayana Hrudayalaya Dental Clinic, Alliance Dental Care (a venture between Apollo and Trivitron Healthcare), and Axiss Dental are some examples.

India’s dental care market is expected to reach $1.3 billion by 2015, according to a Frost and Sullivan report. The market was worth $739 million in 2010 and has recorded a compound annual growth rate of 12 per cent, the report says.

The plan is to have 250 clinics in three years, across various cities in the country. The next city for mydentist will be Pune. Seedfund, which has till now invested Rs 8 crore in the company, will continue to do so, along with a new equity partner. “A term sheet for Rs 60 crore has been signed,” say the Vora brothers. That’s reason enough for them to smile wider now.