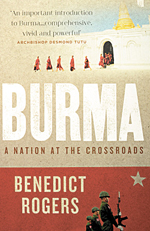 08 November, 2014
Print this article Font size -16+
To an outsider, a lot seem to be happening in Burma of late. Last heard: opposition leader Aung San Suu Kyi says she is willing to be the President of the country. But for a majority of Burmese people, things remain much the same. Tucked away in a corner between south and south-east Asia, Burma has been infamous for Su Kyi’s travails and the military regime’s brutality. In Burma, Benedict Rogers blows the lid of the regime’s bestiality against different ethnic groups. It has used all refinements of torture and oppression to try and wipe out these groups, and Rogers tells us their stories dispassionately. At the end, one wonders at the title, ‘A nation at the crossroads’, given the extent of the peoples’ suffering and the regime’s brutality.
The book sees “not just one or two parts but the entire picture….” It is very ugly. The regime has used different oppression tactics against different ethnic groups with a seemingly common objective — annihilation. Only, these groups have refused to die. Sandwiched between the regime, unwelcoming Thailand and indifferent India and China, they have had a hellish existence since 1958 when the junta took control.
Rogers gets people to tell stories of oppression, rape, torture and, occasionally, a happy development. From his 40-odd visits to Burma and refugee camps in Thailand, China and India, he has woven the tapestry of the suffering. Sample these: rape is used a weapon of war by Burma’s army, and is widespread and systematic. There is extortion and torture. The story of the Rohingyas is particularly telling. As Muslims, they are denied citizenship. To travel from one village to the next, they bribe soldiers. Any resistance is crushed. Escaping persecution, people travel by boat to Bangladesh, Thailand or Indonesia; only a few make it, while hundreds drown at sea. Differences and wars between these groups have made it easier for the junta to continue atrocities. For example, the Rohingyas and the Rakhines have sparred over the Arakan state. The Rohingyas claims they have been there for centuries, but the Rakhines rebut that.
There is a glimmer of hope in the last chapter, where Rogers evaluates the current ruler Thein Sein’s attempts at reform. He draws parallels between the Arab Spring and the liberation of East Timor from Indonesia to state that the spread of communications technology can help the reform process gain traction. The impression is, will Burma hang together after such a recent bloody past, or will it disintegrate? How can the military simply go away after nearly three generations of people have grown up knowing only oppression?
One puts down the book feeling disgusted by the lack of international action, especially by powerful neighbours like India. It is a powerful narrative, but somewhat weaker in analysis. Perhaps, that comes from being too close to the scene of action for too long.
(This story was published in Businessworld Issue Dated 22-10-2012)
Tags assigned to this article:
magazine politics book review culture burma myanmar burma a nation at the crossroads bwbooks7list magazine 22 october 2012 benedict rogers rider sunetra lala