Double Or Nothing: Asus Taichi 31 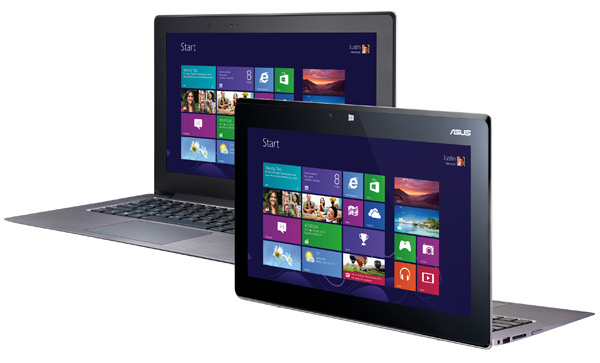 08 November, 2014
Print this article Font size -16+
You've got to hand it to the PC industry. Despite less than stellar Windows 8 device sales, they've pulled out all the stops in terms of innovating on the form factor. Touchscreen laptops? Check. Docking laptop/tablet hybrids? Check. Hinges that go all the way round? Check. Even so, I have to admit the Asus Taichi 31 took me by surprise with its dual-screen setup. Yes, that's another screen bolted around the back where you'd normally expect the laptop lid. So, dual-display laptops — gimmick or genius? Let's find out.

Let's answer the obvious question first - how do the two screens work? Each of the Taichi's screens sport a rich full-HD 1920x1080 resolution display. You use the one on the inside in regular notebook mode, and there's the touchscreen on the outside, which lets you use the PC as a tablet. If you like, you can shut the lid completely and turn the machine into a slate-form factor, or you could also leave the lid open and either mirror your desktop or use the external screen to display something different.

To manage this, Asus includes the TaichiHome app to toggle between the four different modes for the laptop's two screens. Laptop mode is the default mode of operation, while tablet mode is active automatically when you close the lid. Closing and opening the lid will automatically turn off one screen and turn on the other - there's the familiar Windows button on the lid that lights up when the convertible is in tablet mode. You can turn the touchscreen on while the lid is open as well, so that base of the laptop serves as a stand. The third mode - "mirror mode" displays the same image on both screens, allowing someone looking at the back of the laptop to see what you're doing and vice versa - in this mode, both the keyboard/trackpad and the touchscreen can be used to control the computer. Finally, "dual screen mode" extends the desktop to the screen on the lid, useful for things like PowerPoint presentations where you want to show someone something but don't necessarily want them to see everything that's on your screen. Imagine the possibilities — you can open the lid so the touchscreen is pointing at someone sitting across the table from you, and they can watch a video while you edit a Word document. Or, you could play a game together as well.

Where it doesn't stick is the transition between laptop and tablet mode, and there's a distinct delay between when you switch from one mode to another. Not to forget that only the external display is a touchscreen, which is a bit odd given the princely price tag the Taichi commands. Every time you open the laptop up to the Start screen, you'll find yourself reaching forward to touch an icon before realizing that you have to use the trackpad instead. That's standard Windows 8 behavior which you will unfortunately have to unlearn to interact with the Taichi.

Design wise, when the Taichi is closed and turned off, it's a beautiful piece of kit more so given that it packs in two screens without adding to the girth or the weight significantly. It is thicker than the average ultrabook until you factor in the extra screen it packs in. The glass on the lid, courtesy the screen, gives the Taichi an ultramodern vibe. Sadly, beauty is only lid-deep, and the laptop you're going to be using for the most part is distinctly average looking — none of that innovative design thinking seems to have made it past the lid. Also, one design oddity — when the screen is fully open, the rear edge of the lid makes contact with the desk and lifts up the rear of the laptop just a tad. The effect it has is that the keyboard is angled slight forward (which isn't bad per se) — more importantly, it lifts the rubber feet towards the rear straight off the desk, which defeats the purpose for which they're meant (to prevent sliding).

Hardware specs and performance are top notch, with a fast 3rd generation Intel Core i7, 4GB of RAM and a capacious 256GB solid state drive. Now, to answer my original question — adding a second screen adds cost (and how!), weight, and a reduced battery life of just over 2 hours if you've got both screens on. And then, there's the additional problem that you can't just toss this into a bag without worrying about what might end up scratching the outside screen. In return, you gain… nothing, really. A head turner for sure, but little else when you get down to using it.