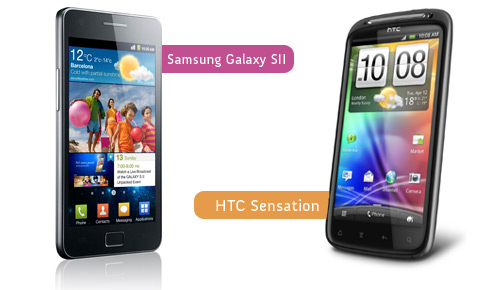 break-page-break
Camera: An even fight here - both the phones pack in 8MP shooters, although specs wise you could favor the Sensation with a dual, rather than single, LED flash. Looking at the images, the SII's camera displays a knack for capturing greater dynamic range and more natural colors. Both cameras also record video in full-HD 1080p resolution at 30 frames per second, so really, there's very little to call here.

Storage: The Sensation features 768 MB RAM and a 1 GB internal phone storage with support for microSD cards up to 32GB (an 8 GB card is included in the box). Compare that with the 16 GB storage on board, 1 GB RAM and microSD expansion, and we have a clear winner in this category: the SII.

Connectivity: Both phones are more than capably equipped on the connectivity front, with HDMI-output through the microUSB slot (no cable supplied though), Bluetooth 3.0 on board, and capability to stream media over the DLNA protocol to your HDTV. Where the SII nosed its way ahead was the inclusion of USB On The Go, where you can plug a USB stick into the phone using an adaptor (again, not supplied). (note: Some HTC Sensation units displayed a Wi-Fi reception issue if the top of the phone was covered by your hands. Caveat emptor.)

Battery: Android phones are fast gaining notoriety as major battery guzzlers, and while both phones pack in capable batteries (a 1650 mAh battery in the SII vs the 1540mAh in the Sensation), they last just over a day of heavy email, Wi-Fi and some amount of media playback. I'd have to pick the SII for its higher battery rating, but when it comes down to it, both have to be charged at the end of a busy phone day.

Pricing and Verdict: Priced more or less alike, there's little in this department to tell these two beauties apart. So which one will it be? While I personally prefer the user interface and the build on the HTC, one cannot deny that the SII edges ahead, if only by the slightest of margins, on account of the awesome display, storage and multimedia features.