New Delhi [India], February 3 (ANI): Bollywood celebrities Akshay Kumar, Ajay Devgn, Karan Johar, and Suneil Shetty recently reacted to the Ministry of External Affairs' statement slamming international celebrities and entities for comments on the ongoing farmers' protest in India.
Akshay, who is currently busy shooting for his upcoming film 'Atrangi Re', called for an "amicable resolution" to the ongoing issue.
Taking to Twitter, Akshay retweeted MEA's statement and wrote, "Farmers constitute an extremely important part of our country. And the efforts being undertaken to resolve their issues are evident. Let's support an amicable resolution, rather than paying attention to anyone creating differences. #IndiaTogether #IndiaAgainstPropaganda." 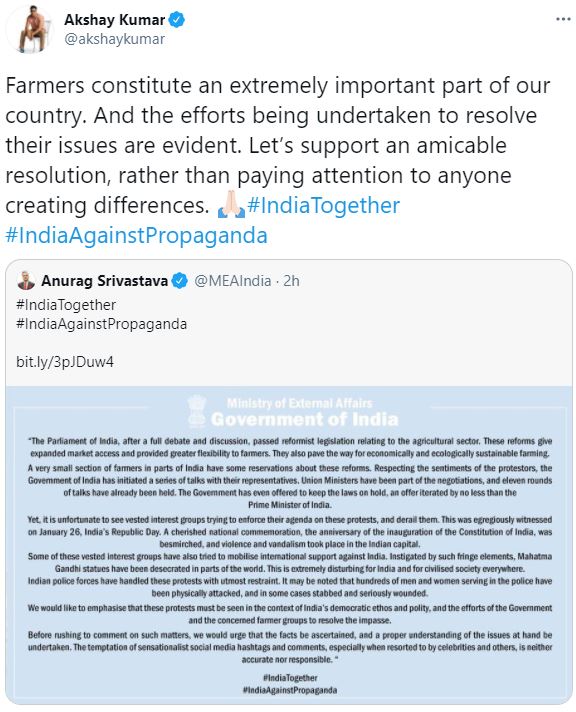 Ajay also took to the micro-blogging site and tweeted, "Don't fall for any false propaganda against India or Indian policies. Its important to stand united at this hour w/o any infighting #IndiaTogether #IndiaAgainstPropaganda."

KJo took to Twitter and wrote, "We live in turbulent times and the need of the hour is prudence and patience at every turn. Let us together, make every effort we can to find solutions that work for everyone--our farmers are the backbone of India. Let us not let anyone divide us. #IndiaTogether."

Suniel also retweeted MEA's statement and said, "We must always take a comprehensive view of things, as there is nothing more dangerous than half truth. #IndiaTogether #IndiaAgainstPropaganda @hiteshjain33." 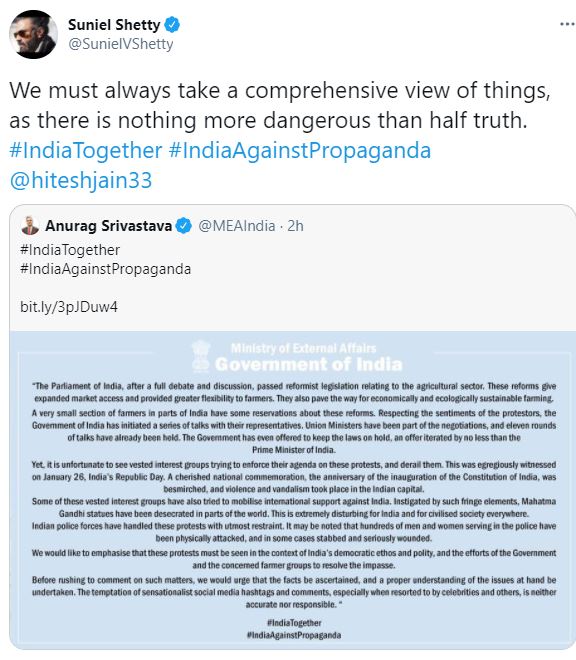 The Ministry of External Affairs, in its statement, said that the government has passed the laws "after a full debate and discussion" and has "initiated a series of talks" to address the farmers' issues. The statement also condemned the violence that broke out during the protests on Republic Day.
The MEA also condemned celebrities, who have drawn attention to the farmers' protest on social media.
"The temptation of sensationalist social media hashtags and comments, especially when resorted to by celebrities and others, is neither accurate nor responsible," the statement read alongside hashtags #IndiaTogether and #IndiaAgainstPropaganda.
The MEA's response came after American pop star Rihanna extended support to the farmers' protest. "Why aren't we talking about this?!", Rihanna tweeted on Tuesday, along with the hashtag '#FarmersProtest'.
Soon after Rihanna's tweet, several other prominent international celebrities and activists including Jay Sean, Amanda Cerny, Lilly Singh, and Greta Thunberg came out in support of the farmers.
Several other celebrities including Priyanka Chopra, Sonam Kapoor, Diljit Dosanjh, have also spoken in support of the farmers.
On the other hand, actor Kangana Ranaut, who had supported farm laws called Rihanna a "fool" and said that the protestors were not farmers but "terrorists who are trying to divide India".
"No one is talking about it because they are not farmers they are terrorists who are trying to divide India, so that China can take over our vulnerable broken nation and make it a Chinese colony much like the USA... Sit down you fool, we are not selling our nation like you dummies," Kangana tweeted on Tuesday.
Farmers have been protesting at different borders of the national capital since November 26 last year against the three newly enacted farm laws: Farmers' Produce Trade and Commerce (Promotion and Facilitation) Act, 2020; the Farmers Empowerment and Protection) Agreement on Price Assurance and farm Services Act 2020 and the Essential Commodities (Amendment) Act, 2020. (ANI)