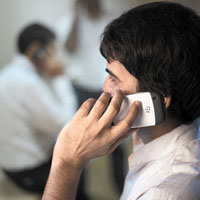 08 November, 2014
Print this article Font size -16+
IT has been a tough year for the Indian telecom industry. For the first time since the sector was opened up in the mid-1990s, the mobile subscriber base has fallen during a calendar year. In January-end, the country had 903 million mobile subscribers. With 9 million GSM subscribers disconnecting in November, the total base has now fallen to 895 million.
While the CDMA subscriber numbers are not yet out, the industry does not expect the base to cross the 900-million mark. The slide started when Reliance Communications reduced its numbers by 20.4 million in July. This was because the Department of Telecommunications (DoT) said it would not release new number series unless operators deactivated subscribers who did not use connections for over 60 days.
This could well be the beginning of a clean-up in India’s subscriber numbers, driven by multiple SIMs. The numbers are likely to fall further over the next couple of months. By 18 January, Uninor (a joint venture between Norway’s Telenor and Sudhir Valia’s Lakshdeep) will have to stop services in 16 circles that account for 10.4 million subscribers. Videocon Telecommunications will have to suspend services in 16 circles with 1.21 million subscribers. There is no clarity on the future of Sistema Shyam, which has 13.7 million subscribers in 21 circles. The 11.61 million subscribers of Uninor and Videocon would definitely need to port to rival operators. That looks difficult.
But why is the subscriber base falling? It can be traced back to the cancelling of 122 licences issued in 2008 by the Supreme Court in February. Since then three operators — Etisalat DB, S Tel and Loop Telecom have shut services. Operators are now rigidly implementing the 60-day no usage check. “There were many inactive subscribers, which is now getting cleaned up. This is good for the industry,” says Hemant Joshi, partner at Deloitte Haskins & Sells.
The second factor is the tightening of DoT’s know-your-consumer norms. Under these, operators now need to verify the antecedents of subscribers using their regular employees rather than outsourcing the exercise. This has increased the connection activation time to a couple of days as opposed to a few hours, says Rajan Mathews, director general, Cellular Operators Association of India.
Meanwhile, the Telecom Regulatory Authority of India has started the consultation process for making roaming free across India, which may result in a further dip in the active mobile subscriber base. But, operators are not complaining. A lower base means higher average revenues per user and lower demand for spectrum, which has any way become expensive.