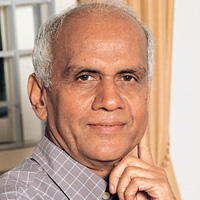 In this fast-changing world, where every day some bank is coming up with a new product with new features promising more return or more safety, often using derivatives and synthetics, it is also difficult for the bank's wealth managers to fully understand the risks before they start selling the products.  Often unintentionally and more out of sheer ignorance, wealth managers fail to explain the risks to their clients.

While I will not defend KB and its officers for what they did to Gautama, clients like Gautama have to realise that there are no free lunches in this world. When they are offered an investment product, which is claimed to yield a higher return than a plain vanilla mutual fund, they have to be on their guard and find out how and why. Generally speaking, higher yields cannot be obtained without higher risk.

Most large banks have a structured products group that keeps churning out products using derivatives and other instruments. Obviously, selling structured products is more profitable for the banks than selling plain vanilla products. So, wealth managers are asked to sell these structured products to their clients to whom the attractive features of the products are highlighted but not the underlying extra risks. Derivatives were meant to help large corporations to hedge risks underlying their businesses. But they are being now indiscriminately used to structure products touting higher returns to unsuspecting retail clients.

A possible explanation as to why KB's wealth manager did not alert Gautama to the 7.5 per cent upfront charge by Instep is the fact that KB was the main beneficiary of the amount taken out of the first premium. The insurance company, in order to induce distributors like KB to sell more of their policies, could have offered an attractive commission on sales that naturally comes out of the first premium paid by the client.
Finally, there is no question whether or not KB betrayed Gautama's trust and confidence in it and its wealth managers. Also, I don't believe that KB intended to cause such loss to one of its longstanding clients because it is not in their interest. Obviously, KB's overemphasis on its sales culture, and their wealth managers not taking the time to understand the real risks for their client in their anxiety to reach their sales targets, are to be blamed. I wonder if hard selling is at all appropriate for banks, which are supposed to be guardians of people's savings. Secondly, when they realise that a mistake has been made, they should immediately acknowledge their mistake and try to make amends. In this case, KB could have easily admitted their mistake and made restoration to Gautama, which would have further reinforced his trust and confidence in his bank. It is probably the peculiar Indian psyche that prevents wrong doers from admitting their mistake and making amends. They don't realise that while for the time being they can escape retribution, in the long run such behaviour will come back to haunt them.