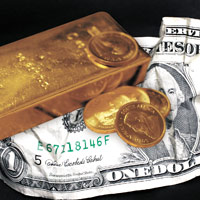 To most in global currency markets, the greenback — the US dollar — is looking positively greener: by that, they mean sick. On the last day before Thanksgiving weekend, the dollar took another pummelling, losing 1 per cent of its value against currencies such as the euro and the yen.

What was different this time was there was no rise in US stockmarkets that usually accompanies any decline in the greenback (since July, the dollar is down 9 per cent, and the market up nearly 20 per cent).

Also on Wednesday Russia announced that it would be adding more gold to its reserves. Not too long ago, Russia had stated that gold would constitute 10 per cent of its reserves. Over the past several months, China has been transferring much of its gold production — it is the largest producer of gold in the world — to the central bank. There have been reports India wants to buy another 200 tonnes from the International Monetary Fund.

Some commodity newsletters also report that big buyers of the metal — hedge funds, sovereign wealth funds and central banks — are demanding physical delivery, and are even willing to pay for both delivery and storage. Central banks — such as those of Germany, Hong Kong and the oil-rich countries — are reported to have moved their gold out of the US Federal Reserve and the Bank of England.

At just over $1,100 an ounce (in today's dollars) compared to $2,350 an ounce  seen in the 1980s, the gold scare seems a little extreme. But it also says much about the value of paper contracts — and the US dollar.