Do You Have An Idea? 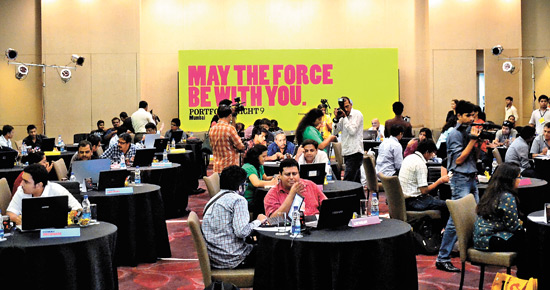 For others, the evening was about tracking their personal progress. Kumbhar recalls that the previous year the creative directors advised him to work harder on execution. "This year they liked both the idea as well as the execution. Now they have asked me to focus on layouts," he says, commenting on his journey of improvement.

Participants got goodie bags, which had a horse-shoe as a lucky charm, electrolyte powder (to stay tension free), Mentos candies that go with the ad line ‘dimag ki batti jala de' and a bar of Cadbury's Diary Milk for shubh aarambh (auspicious beginning).

break-page-break
For many participants this was a short cut to meet their advertising idols — served on a platter. "In our days we had to make 200 phone calls just to reach the secretary of the CD. That too, if we were lucky," recalls Satbir Singh, managing partner and chief creative officer of ad agency Euro RSCG, who was among the 27 creative heads evaluating portfolios that evening.

"I was unable to get my work to reach the right people as most of the time it gets lost in the transition," says one participant. Portfolio Night removes the unwanted middlemen (take that, creative group heads) and that makes it so unique, he adds. That is why participants went the extra mile to reach Mumbai's suburb of Goregaon from all corners of India. One creative head recounts meeting a participant from Tripura, while Sanghamitra Baral, who moved from Bhubaneswar to Delhi to further his advertising dreams, turned up at Portfolio Night and took back five job opportunities by the end of it — each participant gets to meet only three creative directors during the session while the rest happens during the post-session networking. A participant from Ahmedabad came to know of the event just a day before it was scheduled. "I was lucky enough to get the last ticket, spent the whole night preparing my folio and flew down from Ahmedabad to attend," he recounts.

Meeting With The Stars
Some managed to reach the big-boss in the agency they worked for. Saarthak Dutt, an engineer who now works as a trainee copywriter at Ogilvy, was among them. That evening, Dutt got to meet his agency's national creative director Abhijit Avasthi in person. But he feels the 15-minute interaction during the session was too little. "It was like speed dating. The moment it got interesting, they rang the bell to change the station," says Dutt. But for others it was more than enough to solve the dilemma of a lifetime. "Interacting with the NCD for just five minutes solved the biggest confusion. Just by looking at the work they identified where my strengths lie and told me to get into art and not copy. It was an amazing experience. What more can I say?" says Sweta Jasapara, one of the participants.

Portfolio Night 9 also gave people such as Pratiksha Dinesh More a second shot at pursuing her dream career. An alumnus from Mumbai-based Welingkar Institute, More always wanted to be a copywriter, but had to take up a job of an accountant to overcome financial constraints. Some others got advice to change track. Kishori Tikmani from Symbiosis was one among them. Ogilvy's Anup Chitnis told her, she says, "Instead of pursuing a career in graphic design, I should work in the planning department of an advertising agency and that he would ask the planning department of Ogilvy and Mather to contact me." Sajan Raj Kurup, creative chairperson, Creativeland Asia, found some of the work from freshers to be outstanding. Some even turned up with well-edited films, he says. Kurup's advice to one such participant: "You could be the next Ram Gopal Verma."

But life isn't always hunky dory at Portfolio Night, especially if a participant's knowledge of advertising begins with Piyush Pandey and ends with Prasoon Joshi (blame the media for that). One such participant (who we will not name because he is already feeling so bad about it) received an offer from Scarecrow's Bhat last year. "Raghu told me about his new venture. I decided against joining an agency that has just started. Till date, I really regret saying no to him," recalls that participant. Another participant, Aarish Matcheswalla, who has completed a PG course from Mudra Institute of Communications, Ahmedabad (Mica), recalls spotting a man crying in the restroom after the judging session. Gentlemen's section, we assume. In advertising, one can never be sure.