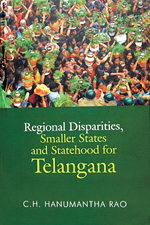 The violent protests for and against Telangana may have simmered down, but core issues remain unresolved. In this book, noted economist C.H. Hanumantha Rao argues that larger states have always had inequitable distribution of resources, so the development has also been unequal. And, hence, the demand for statehood to Telangana is logical.
The book cites copiously from various papers written over a period of four decades. Dissecting them masterfully, Rao says no single strategy would work for a large country like India. The basis of formation of states should not be language, but factors such as geography. There is nothing wrong with bifurcating large states on the basis of demography and natural resources. B.R. Ambedkar, the architect of the Constitution, also favoured the idea of having more than one state sharing one lingo.

Larger states often breed inequality among different regions and income groups. The political patronage to the rich and influential not just widens the chasm, but also creates more cracks in the ecosystem. Rao says that newly formed states such as Chhattisgarh, Jharkhand and Uttaranchal have outperformed their parent states economically. He does not believe the Telangana question is an emotional issue. Rubbishing the notion, he says the demand is based on sound economic reasons.

The ratio of population in Telangana and Andhra regions has changed significantly in the past decades, necessitating a change in the distribution of financial aid provided under the Central Plan. However, the authorities are blind to this uptick in population in Telangana, which jeopardises parity between the two regions. Rao notes the imbroglio has no other solution, but the creation of a separate state for Telangana.