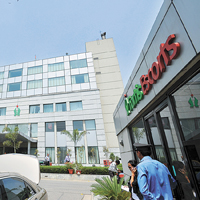 
In the January-March period, Fortis completed the integration of its acquired international businesses and Indian operations. In the process, it overtook Apollo Hospitals to become the largest corporate healthcare player in India. Its revenue was Rs 2,983 crore during the year ended 31 March 2012, twice the Rs 1,491 crore registered the previous year.

Bali says the annual results may not reflect the revenue potential of the group as the international revenues, which contributed almost 50 per cent, were not there in the first three quarters of the 2011-12 period. "Our consolidated global revenue for the January-March 2012 quarter was Rs 1,279 crore, compared to Rs 412 crore the previous year," he says.

Fortis has also restructured its supply chain business to make it more cost effective. "We have created a global supply chain organisation based in India. It will help us leverage the advantages of global sourcing of consumables, medical technology and equipment," says Bali.

The company says it is diluting its stake in the core hospital business to not only attract funds but also focus on "servicing patients".