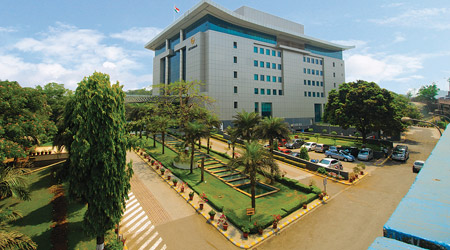 Media reports said that L&T is said to be in talks with French Schneider Electric and US- based Eaton Corp to sell this business. S.C. Bhargava, head of L&T's Electrical & Automation Operating Company, says he will not comment on what he called "speculative media reports".

Company sources say L&T is exploring initially roping in a joint venture partner with a significant strategic stake. "Depending on the success of this alliance, the management can take a call whether to exit the business fully through a structured stake sale over the next 4-5 years," says a senior company executive.

The division contributed only 7 per cent of L&T's annual revenues of Rs 43,970 crore in 2009-10. Sources cite the electrical and electronics business is more of a product driven, business to consumer (B2C) type, one that is not in line with L&T's core engineering capabilities rooted on big projects and construction.

Despite growth in revenues, sources say, the division has been struggling for the past five years. Its revenues were Rs 1,220 crore in 2004-05 (FY05) with earnings before interest, tax, depreciation and amortisation (Ebitda) of Rs 12.7 crore. Revenues were Rs 1,582 crore in FY06 and Rs 2,067 crore in FY07. But Ebitda was almost stagnant at Rs 15.5 crore and Rs 15.9 crore respectively in those two years. Thanks to the acquisition of Tamco of Malaysia and rapid expansion in the Middle East, the division's revenues grew faster in the next 2-3 years. Gross sales in FY10 were Rs 3,675 crore, with profit before interest & tax of Rs 390 crore.

"The L&T management fear the company may not be able to gain leadership position in the electrical and electronics business, once multinational corporations like Schneider Electric and Eaton Corp begin to aggressively tap the Indian market," says a Mumbai-based analyst. The electrical and automation industry has grown at 20 per cent in terms of topline and 17 per cent compounded annual growth rate in terms of bottom line in the past five years in India.

The divestment — should it happen — will also help L&T use monies from the stake sale to fund its planned power projects. It is targeting at least 1,000 megawatts of capacity each year, which will require at least Rs 400-600 crore as equity infusion. The division has manufacturing units at different locations in India (two in Mumbai, one each in Ahmednagar, Mysore, Faridabad and Coimbatore). Given the amount of land freed up by the sale, real estate development is a possible option for L&T.

Investors are also concerned. L&T's share prices fell from a weekly high of Rs 1,768.35 per share on Monday to Rs 1,664 after the announcement. Not exactly a vote of confidence.