Washington [US], February 4 (ANI): Burlesque dancer and designer Dita Von Teese has broken her silence surrounding the abuse allegations against her ex-husband and musician Marilyn Manson by multiple women, including American actor Evan Rachel Wood.
Speaking out about the allegations, Von Teese said that the abuse claims levelled against Manson 'do not match' her experience with the musician.
In a statement posted on Instagram on Wednesday, Von Teese said that she did not experience abuse from Manson, but added that "abuse of any kind has no place in any relationship."
She started her post by writing, "I have been processing the news that broke Monday regarding Marilyn Manson. To those who have expressed your concerns of my well-being, I appreciate your kindness."
"Please know that the details made public do not match my personal experience during our 7 years together as a couple. Had they, I would not have married him in December 2005. I left 12 months later due to infidelity and drug abuse," she said.
"Abuse of any kind has no place in any relationship. I urge those of you who have incurred abuse to take steps to heal and the strength to fully realize yourself. This is my sole statement on this matter. Thank you for respecting this request," Von Teese concluded. 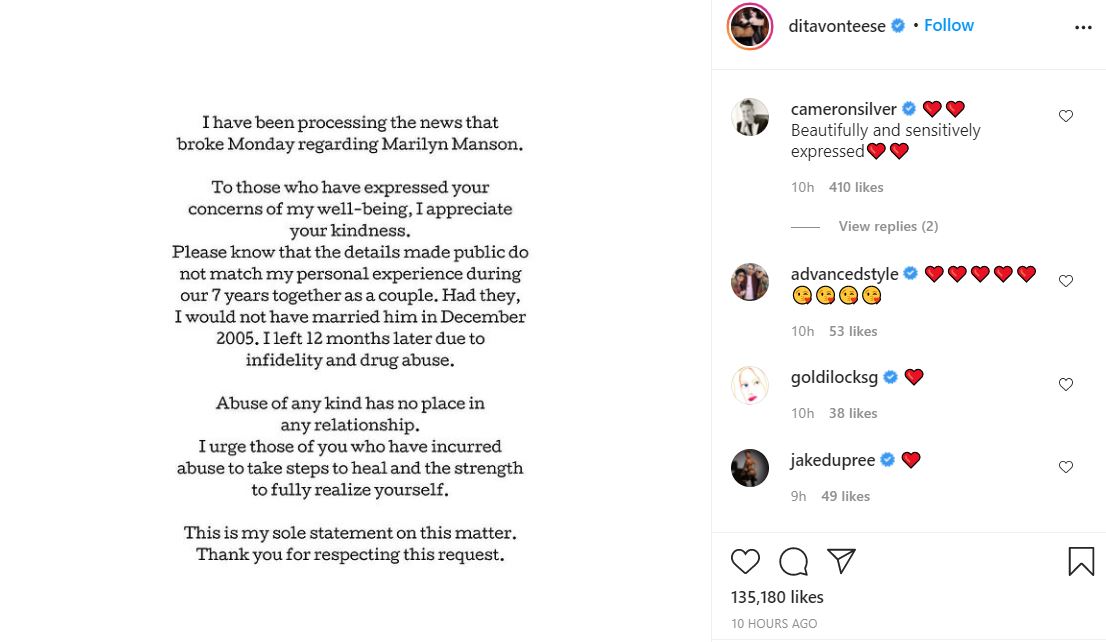 Manson has yet to address Von Teese's remarks about their marriage, but this isn't the first time she spoke about their breakup on the artist's controversial ways. In a 2007 interview, she accused Manson of having an "inappropriate relationship" with another woman during their marriage.
Wood has often alluded to Manson when speaking about being a survivor of domestic violence over the years. Wood and Manson went public with their relationship in 2007 when she was 19 and he was 38. They became engaged in 2010 but broke up later that year.
In an Instagram post early Monday morning, Wood said, "The name of my abuser is Brian Warner, also known to the world as Marilyn Manson. He started grooming me when I was a teenager and horrifically abused me for years. I was brainwashed and manipulated into submission. I am done living in fear of retaliation, slander, or blackmail. I am here to expose this dangerous man and call out the many industries that have enabled him, before he ruins any more lives. I stand with the many victims who will no longer be silent."
Four other women have also come forward with similar accounts of abuse from Manson. Wood also shared similar stories from photographer Ashley Walters, model Sarah McNeilly, an artist who identified herself only as Gabriella, and student Ashley Morgan.
Manson responded to Wood's allegations in an Instagram post on Monday night.
"Obviously, my art and my life have long been magnets for controversy, but these recent claims about me are horrible distortions of reality," he wrote.
"My intimate relationships have always been entirely consensual with like-minded partners. Regardless of how -- and why -- others are now choosing to misrepresent the past, that is the truth," he added.
Wood spoke out about being a survivor of rape and domestic violence in a Rolling Stone article in 2016 and has focused her activism on those issues.
In wake of the allegations against Manson, his upcoming appearances on Shudder's Creepshow and Starz' American Gods were scrapped. The singer's record label, Loma Vista Recordings, also dropped him. (ANI)