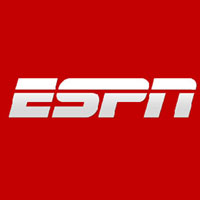 08 November, 2014
Print this article Font size -16+
ESPN, the sports channel that is Walt Disney Co's most profitable unit, is cutting 300 to 400 jobs across the company and closing a small Denver office, a person with knowledge of the cuts said.

The job cuts, comprising 4 to 6 per cent of ESPN's staff of 7,000, include open positions that will not be filled, said the source, who asked not to be named because the information is not public.

But ESPN will continue hiring for other open positions, the person said. The channel has recently won rights to exclusive coverage of the US Open Tennis tournament, and is starting a new channel focused on U.S. Southeastern Conference college football.

The Denver office only has "a handful" of employees, the person noted.

The cuts are part of an ESPN internal review, and are not related to similar measures at Disney, said a source familiar with Disney's thinking, who declined to be named because the information is not public.

ESPN informed its staff about the layoffs on its internal website, and encouraged employees to contact their supervisor with any questions.

The cable channel declined to comment beyond saying in a statement that "we are implementing changes across the company to enhance our continued growth while smartly managing costs."

Reuters reported in April that Disney, which owns 80 per cent of ESPN, was cutting 150 jobs at its studio and an undisclosed number at its consumer products division. The Burbank, California-based company also laid off about 150 employees at its newly acquired Lucasfilm unit in April.

In May, ESPN said it would pay for the rights to US Open Tennis that it did not already have for an amount widely reported to be $825 million. It also said in May that it was starting a new channel focused on the Southeastern Conference, or SEC, that will carry 45 college football games starting in 2014.

Like all sports channels, ESPN been struggling with rising sports programming costs, but it commands the highest affiliate fees paid by cable systems, which are on the rise.

ESPN receives $5.15 per subscriber per month and is seen in well over 101 million homes, according to the National Cable & Telecommunications Association. Disney's cable unit earnings rose by 8 per cent, to $2.7 billion, in the latest fiscal 6-month period, the company said.

DirecTV, Dish Network Corp and Time Warner Cable Inc are just some of the cable and satellite TV operators that have complained about rising sports fees that ESPN and its rivals charge.