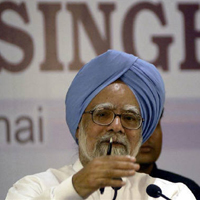 Addressing the 8th Civil Services day, Singh said his government has made sustained efforts to curb corruption and enhance transparency and accountability in

public works. He also said the government needs to make full use of new and modern technology not only in delivery of public services but in governance in general.

"A good example of such use is the Aadhar programme for providing all the residents of our country a unique identity, and also the Direct Benefits Transfer

scheme based on Aadhar numbers that our government launched a few months back.

"It will lead to better targeting of subsidies and reducing delays in the delivery of benefits such as scholarships and pensions to the intended beneficiaries. It will also help in curbing wastages and leakages, and result in greater financial inclusion," Singh said.

"I think it is also important to recognise the fact that the programmes like the Direct Benefits Scheme also give a sense of empowerment to the people, increase their faith in the processes of governance and therefore have a far larger positive effect than can be measured by the direct advantages they give," he said

asking the bureaucrats, involved directly or indirectly in its implementation, to ensure the scheme is a success.

The DBT scheme provides for cash transfer of subsidy from the government directly to an Aadhar-linked beneficiary's bank account.

"Our government has also made sustained efforts to curb corruption and enhance transparency and accountability in the work of public authorities. There are several legislative initiatives that we have taken in this regard, for example the Right to Information Act, the Lokpal and Lokayuktas Bill and the Whistleblowers Protection Bill.

Singh said there was a need to take special care of socially and economically backward people of society in order to provide access to quality education and health services at affordable costs, safe drinking water, sanitation and so on to the citizens.

"We must recognise that we have a lot of work to do to bring the delivery of some of our public services up to international standards," he said.

Citing the Right of Citizens for Time Bound Delivery of Goods and Services and Redressal of their Grievances Bill, 2011, which is under consideration of Parliament, Singh said the proposed law when enacted will give citizens the right to receive specified goods and services in a time bound manner.

"I would also like to mention in passing the need for strengthening the implementation of our flagship Mahatma Gandhi National Rural Employment Guarantee Scheme, which by most accounts has been a success," Singh said He said there was a need for much greater attention for management of urbanisation.

"Management of urbanisation is an area which requires much greater attention on the part of our planners. It is estimated that in 20 years time, nearly 50 per cent of our population will be living in urban areas.

"We have to ensure that our towns and cities provide public services of a high quality to their residents. To that end, much greater attention has to be paid to the modernisation of the processes of municipal governance. Our Civil Services also should be better equipped with skills for managing urbanisation and urban spaces," he said, stressing on training of government servants for capacity building.