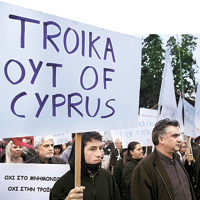 08 November, 2014
Print this article Font size -16+
The €10 billion international bailout deal for Cyprus has emerged as a potentially decisive test for the German-led push for discipline and austerity in the European Union (EU). The backlash in Cyprus and across the world has prompted fresh concerns about solidarity in the EU and its ability to hold together in the long run with such divergent economies. Banks, which had been shut for almost two weeks to contain the cash outflow, reopened in March-end to a much-regulated response. The European Commission said the capital controls were legal and justified under EU law provided they were strictly temporary and proportionate. But the bailout looks set to push Cyprus deeper into a slump, shrink the banking sector and cost it thousands of jobs.

Royal Pain: A group of 21 shareholders of the Royal Bank of Scotland (RBS) has launched a multimillion-pound lawsuit against the bank for misleading investors at the height of the 2008 credit crisis. In the court document filed in the UK over the bank’s £12-billion cash call in April 2008, the claimants — international investors and pension funds — allege the bank published a defective prospectus littered with misstatements and omissions. The claim was made days before a bigger lawsuit was expected from another group.

Under Attack: The world saw one of the biggest cyber attacks ever to hit Internet services after non-profit group Spamhaus, which blocks “spam” content, became a target. Spamhaus said it had been subjected to “distributed denial of service” attacks on an unprecedented scale — at 300 GB per second — for more than a week. This caused widespread congestion and jamming of crucial infrastructure around the world. The dispute started when Spamhaus added Dutch firm Cyberbunker to its blacklist, which is used by email providers to weed out spam.

Power Play: In what has turned into a three-way contest between two private equity giants and one of Wall Street’s most aggressive activist investors, Michael Dell is the biggest wild card now in the separate buyout attempts by the Blackstone Group and billionaire Carl Icahn. Few predicted a bidding war for a company struggling to remodel itself as its core market declines, let alone one that pushed its value above $24 billion. Now, both Blackstone and Icahn have proposed offers for the company. But with Dell owning roughly 16 per cent of the firm, any hostile takeover where the founder is not given a starring role in the new company could mean an unhappy major shareholder second-guessing its strategy from the sidelines.

Dragonomics: During the BRICS Summit in Durban, leaders from Brazil, Russia, India, China and South Africa were seen trying to sort out funding basics of the proposed development bank for emerging economies. China, the world’s second-largest economy, has reportedly agreed to contribute $41 billion to the bank’s $100-billion capital, South Africa $5 billion and the others $18 billion each. Although few view this move as an opportunity for China to build trust with other emerging powers, some are wary of how much clout this will give the communist nation in the decision-making process.

Pick-Up Line: Yahoo! Inc. has snapped up mobile news aggregator Summly — the latest in a string of small acquisitions to bolster its mobile services. Founded by Nick D’Aloisio, 17, two years ago from his London home, Summly sorts news by topics in quick bites for smartphones. The start-up works closely with News Corp and is backed by Chinese investor Li Ka-Shing and angel investors, including actor Ashton Kutcher. Yahoo! reportedly paid D’Aloisio around $30 million, and intends to use the technology to reinvent its information delivery system.

Big Blow: Facebook’s stock market debut left founder and CEO Mark Zuckerberg with a fortune currently valued at $13 billion on paper — and a 2012 tax bill of around $1.1 billion, according to reports. Zuckerberg’s whopping tax hit stems from his move last May to up his stake in Facebook by 60 million shares at a “strike price” of 6 cents each. Even if those shares are never sold, the IRS treats them as ordinary income at the time the options are exercised and, thus, taxable.

Asian Star: Malaysia is ahead of China in terms of the size of its foreign direct investment (FDI) into Africa and the gap is widening, according to latest United Nations data. A survey of foreign investment into and out of the five BRICS countries showed that China’s march into Africa has lagged behind the flow of cash from Kuala Lumpur. For Malaysia, the big spenders in Africa include Petronas and Sime Darby. Overall, Malaysia was the third biggest investor in Africa in 2011, behind France and the US, pushing China and India into fourth and fifth positions. Malaysia’s portfolio of global FDI quintupled over 10 years to reach $106 billion by the end of 2011. Of that, $19.3 billion was in Africa.

Home Battle: Pakistan’s former president, Pervez Musharraf, returned home on 24 March after nearly four years of self-imposed exile to contest elections despite the possibility of arrest and death threats from the Taliban. Musharraf hopes to win seats in the general election on 11 May, when he will face fierce competition, especially from Nawaz Sharif, whom he ousted in a coup. He will have just two months to try to persuade voters that his political party can deliver what others have not.

Joining Hands: Tacitly confirming reports of signing an agreement with Pakistan to build a 1,000 MW nuclear power plant, China defended the deal saying that it conformed to safeguards of the International Atomic Energy Agency (IAEA) and rejected allegations that it has violated Nuclear Suppliers Group (NSG) norms. Chinese foreign ministry spokesman Hong Lei said, “This cooperation is for peaceful use and is in compliance with our respective international obligations and subject to the safeguards of the IAEA.” China has so far aided and assisted Pakistan in constructing four power plants at Chashma. It is not clear whether the deal was for an additional reactor at Chashma or involved upgrading the third reactor at the site.