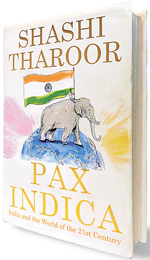 It is not easy for a lay reader to digest a 400-page tome on foreign policy. The task becomes even less pleasurable when it is replete with redundancies. But if you can tolerate these bugs and a liberal dose of diplomatese, Shashi Tharoor’s Pax Indica is worth your time. It gives a comprehensive overview of India’s foreign policy, appraises current practises, offers prescriptions and scrutinises India’s relationships with countries that matter. Obviously, it discusses India’s relationship with Pakistan — ‘Brother Enemy’. Tharoor establishes what we all know today — the military calls the shots in Pakistan. He emphasises that the nation’s military enjoys the largest share of the country’s GDP — the highest anywhere in the world.

The author feels that India should be magnanimous in its relations with Pakistan. It is quite befuddling, though, how one deals with a state where the power resides not with a democratically elected civilian government. A stable Pakistan is in India’s interest, but unless there is a single power centre to engage with, India is left with few options.

Tharoor meticulously debunks the myth of India-China parallels that have become a fashion in international relations discourses. He sums it up: China will replace the US as the world’s sole super power.  The former UN diplomat goes on to address the ‘commonalities’, ‘competition’, ‘complementarities’ and ‘the risk of conflict’ between the two countries, but falls short of a realistic assessment on at least one ground: conflict.

His account of the conflict of interest between the two countries is at best cagey. His argument that the trade between India and China is a deterrent to any potential conflict does not address the aggressive posturing by China. Keeping aside possibilities of a military conflict, how do we respond to aggressive Chinese business moves? For example, recently, oil block number 128 in the South China Sea, which PetroVietnam contracted to India’s ONGC for exploration, was put up for bidding by the China National Offshore Oil Corporation. India had to meekly retreat. Tharoor does not clearly address India’s diplomatic options in such scenarios.

China’s sole claim over the South China Sea is akin to bullying. Samuel Huntington’s controversial book The Clash Of Civilizations cites such Chinese moves as a precursor to a bigger conflict. So, what should we do? Tharoor is reluctant to admit that India needs to be prepared. This is made evident by his contradictory postulations: “The world is big enough for India and China, together and separately, to realise their developmental aspirations” and “…the rise of an authoritarian China also pose specific national security challenges to the US and India”.

On Indo-US relations, Tharoor does not deviate much from his known stance. His says that the ties should be driven by “shared values”. Is this the best way forward? India’s foreign policy practitioners might beg to differ. Indo-US relations need not be a romantic union with underlying currents of shared values. For though they exist, the US foreign policy has always been dictated by pragmatism — so should be ours.

Tharoor’s analysis of India’s relations with Russia is debatable. He makes a compelling case by citing the insignificant trade volume — $2 billion — between the two countries as indicative of limited potential. But should that be the dominant criterion for an old ally?

By the time one finishes the book, one would be impressed by the amount of information packed into it, but the same cannot be said about the ideas expressed — with the possible exception of the proposals on harnessing soft power. Also, sharper editing could have done the work greater justice.

Pax Indica might not cut ice with our foreign policy establishment but it promises to serve the purpose it is meant for: it could well bring foreign policy discussions to peoples’ living rooms.