Sirsa (Haryana) [India], November 27 (ANI): Farmers groups, including women, continued their march towards Delhi on Friday while protesting and raising slogans on the main highway in Sirsa.
Farmers are headed toward the national capital as part of their protest march against the Centre's farm laws amid heavy security deployment.
"Whatever we do will be peaceful. We will not harm any person or property. Even if we have to stay for a month, we will. Even if we will have to attain martyrdom, we will," said one of the farmers.
Besides Sirsa, farmers from Punjab were seen waiting at the Shambhu border between Haryana and Punjab, near Ambala, to proceed to Delhi as water cannon and tear gas shells were used to disperse them.

Meanwhile, farmers continued to protest at the Tikri border area -- which leads from Delhi to Bahadurgarh as they continued their effort to move towards the national capital.
"It is really unfortunate that we are forced to come on the streets. All the protesting farmers were very peacefully moving towards Delhi then why were we stopped with all kinds of stops and barracading. For the last three months, we have been agitating. Why we are not being allowed to visit Delhi to convey our message," said one of the protestors.
Moreover, farmers raised slogans against the Centre's Farm laws, at the Singhu border (Delhi-Haryana border). One of the posters read: "Take back anti-farmer laws". Another poster said the farmers will not shy away from "spilling their blood" for the cause. 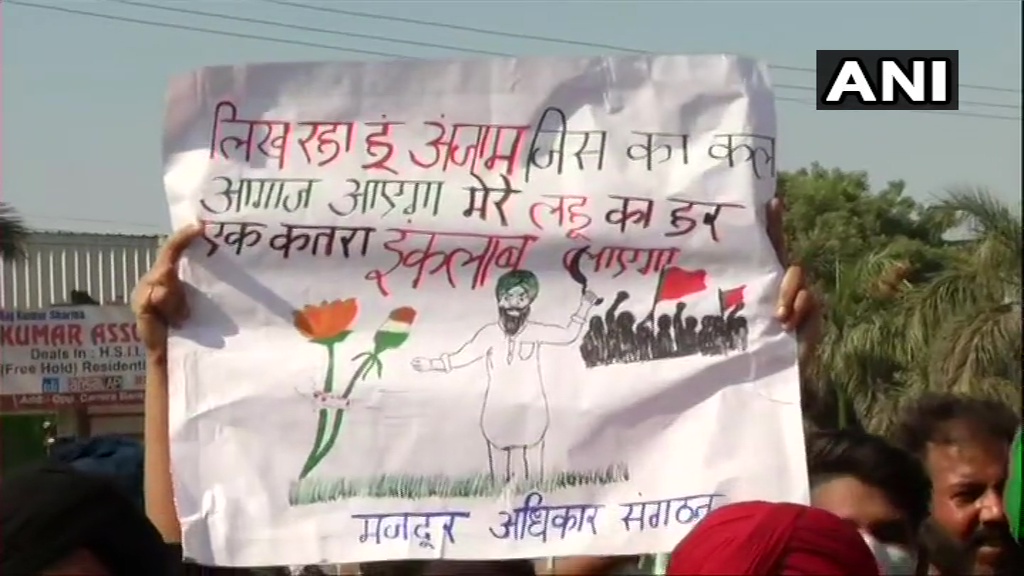 While the government said the three laws will do away with middlemen, enabling farmers to sell their produce in the commercial markets, protestors fear that this could lead to the government not buying produce at guaranteed prices, thereby disrupting their timely payments.
Farmers are protesting against the three laws -- the Farmers Produce Trade and Commerce (Promotion and Facilitation) Act, 2020, The Farmers (Empowerment and Protection) Agreement on Price Assurance and Farm Service Act, 2020, and The Essential Commodities (Amendment) Act, 2020. (ANI)