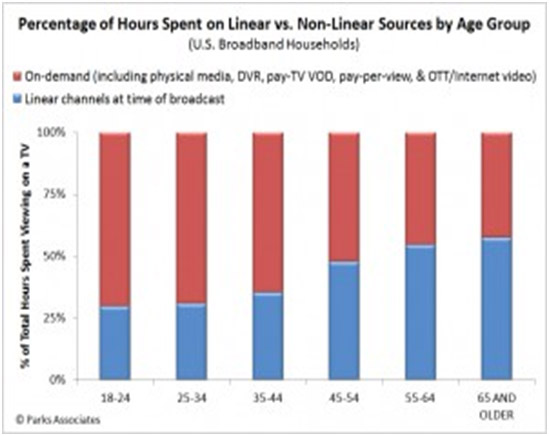 10 March, 2015
Print this article Font size -16+
Television viewing has been an integral part of our home entertainment experience for decades. However, as the number of devices in a home go up and as more people go to work, entertainment has become a personal experience. TV viewing is increasingly being driven more by recorded shows, personal viewing schedules and choice of programs. Globally, the popularity of on demand services such as Netflix has driven this trend. And in places where 'non linear' services are available, it has been noticed they are getting a larger share of viewership over 'linear TV' channels.

A survey of US TV households reveals that 62 per cent of homes have a DVR service, up from 41 per cent five years back. 59 per cent of them subscribe to an on demand service such as Netflix, up from 10 per cent in 2004. Traditional broadcast TV platforms have taken note and both service providers and broadcasters are launching 'over the top' (OTT) services. Dish Network's Sling TV in the US have got off to a good start and broadcasters such as HBO, Showtime, ESPN, Starz, CBS, BBC, Channel 4 and many more have announced or launched subscription on demand services. On demand viewing is further driven by the adoption of streaming media players and connected TVs. Connected TVs are projected to reach 30 per cent of total TV sets by 2020 and grow from the 339 million units in 2014. Similarly, streaming media players are projected to grow from 36 million units in 2014 to 183 million units in 2020.

India is already following global trends. Online video viewership in India was 54 million in 2013 while 59 million in the US viewed online video. Average viewership in minutes in the US is 23 minutes per day against 15 minutes per day in India. What is different though is that while 23 per cent Americans view TV online, Indian video viewership is still driven mostly by Youtube and short form video clips. This is bound to change as more and more as broadcasters focus on digital content and cable TV digitization increases the broadband footprint in India.

As cable TV is digitized, last mile cable networks are switching from coaxial to fiber in the last mile which is the network between the cable operator's control room and the junction box near the consumer's home and that will enable broadband delivery to all digitized homes. In the US too, the top nine MSOs now command a 59 per cent share of the 85.9 million broadband homes while the remaining telco broadband connections have been declining. In India, while 15 million fixed broadband connections are provided by telcos, a mere 1 million is provided by cable TV MSOs. This will change very soon.

The quality of broadband and its cost matters too. The above table shows that the average subscriber in the US (15th to 80th percentile) consumes around 30 GB of data every month while the top 15th percentile consumes almost 7 times of that. According to Akamai's State of the Internet report 2014, while average broadband speeds in the US is 2.9 Mbps, only 5 per cent of connections in India get around 4 Mbps and the average connection speed is 1.7 Mbps.

The rise of multi-screen viewing in India is only expected to lead to a further increase in demand for bandwidth. While Indians spend 147 minutes on their mobile phones every day according to Milward Brown's Ad Reaction report 2014, they spend close to the global average of 113 minutes every day watching TV. As video viewing increase across screens, bandwidth requirement is expected to double to a minimum of 4 Mbps per home.

In addition to the availability and quality of broadband, and the use of multiple devices and screens in homes, another factor that is expected to drive on-demand media consumption is the increase in the number of connected TVs and media gateways. India is projected to add 75 million units of connected TVs by 2018, only after China. And as cable TV networks that provide both broadband and TV prosper, it is expected that they will replace set top boxes (STBs) with media gateways that combine the functionality of STBs and broadband CPEs (modems and routers) to cut costs.  This again follows global trends where STB demand has dropped by 10 per cent year on year while demand for IP video gateways are projected to grow at 79 per cent CAGR between 2014 and 2018 (source : Infonetics Research).

The author is the Chief Executive Officer at Lukup Media that operates an OTT TV service in India powered by the Lukup Player, a multi-screen media player that the company manufactures and distributes in partnership with last mile cable networks in India
Tags assigned to this article:
it more 4 technology media cagr digitization kallol borah