Digging Up A New Opportunity 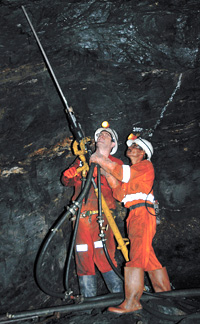 Explains Solanki: "They would like to be re-compensated with all the benefits they did by missing out on as a non-state run unit's employee." It is an expensive proposition. And SAIL may also opt for a joint-venture where risks can be shared and the cost of outsourcing R&R lowered. R&R is also the kind of job that requires the blessings of "local muscle power". Not surprisingly, Thiess - bound by its rules of conduct - takes on projects only after the land has been acquired. "There is no dearth of people who offer to do it all. But if the land is in the name of the owner, it's in the owner's interest to acquire it on its own," says a candid Raman Srikanth, managing director of Thiess India.

Then you have Adani. Of its four mining contracts, two are joint ventures. In Parsa Kente Collieries, it holds a 74 per cent equity interest under a 30-year agreement with Rajasthan Rajya Vidyut Utpadan Nigam. And it is doing just about everything from obtaining approvals, acquiring land, setting up a washery and constructing a railway siding at the mine.

According to Mukherjee, there are two basic challenges. The first is to understand the management of all regulatory frameworks. The second is to provide logistical support that will ensure the evacuation of the mined resource in the most efficient and least polluting manner. In more developed mining environment, such as that in Australia or South Africa, minerals are taken from the pit mouth straight to the loading depot often through private railways. Emerging markets in the African continent are also planning similar infrastructure support.

In India, Adani hopes to bring its shipping assets to the table. According to its spokesperson, it is cheaper to transport coal from Australia to India than move it from the east coast to the west coast of the country via road and rail. With ports planned in Orissa, Adani can ship coal to its clients in Gujarat and Maharashtra more economically. With more entrants, it's a matter of time before contract mining digs itself out of the pits.