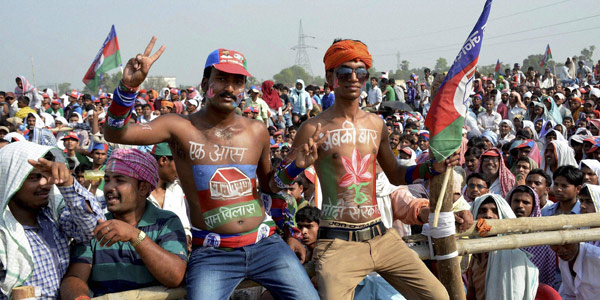 08 November, 2014
Print this article Font size -16+
Ever wondered why the ongoing general elections should be a reason for the Office of the United States Trade Representative (USTR) to retain India in the same category of annual ranking that assesses the intellectual property rights (IPR) protection level of trading partners?
You may find the answers in the election manifesto of the country’s principal opposition party, the Bharatiya Janata Party (BJP).
BJP, tipped as the strongest contender to power post-elections, talks about strengthening IPR in at least four areas in the 52-page manifesto released last month.
In the “business and trade” section, the party makes a categorical statement that it will “embark on the path of IPRs and patents in a big way”.
In addition, the section that talks about promises that relates to “science and technology”, calls for the creation of an IPR regime which maximises the incentive for generation and protection of intellectual property for all type of inventors.
Read Also: US Resists Pressure To Give India Worst Offender Rating In IP Review
Read Also: India Invites US To Discuss IP, Market Access After Polls
Further, it pledges to create special courts to deal with IPR cases. Development of a national network of specialised universities with expertise in complementary domains including IPR is another promise.
In contrast, the ruling Congress Party, in its manifesto provides minimal space for IPRs as an election promise. Where it gives, it talks about the need to create a patent pool to ensure that the domestic small and medium enterprises are able to access world-class technology at affordable cost – a promise that is not very exciting from a foreign multinational's point of view.
USTR’s 2014 Special 301 report, published on April 30, had, while listing India on its Priority Watch List, called for renewed and intensive engagement with the country as elections conclude and new counterparts take office.
“The election of a new government in India provides an ideal opportunity to turn areas of contention into areas of collaboration.  The remarkable history of this bilateral relationship in just the last twenty years tells us that this is not only possible, but essential if the world’s two largest democracies are to demonstrate successfully the defining partnership that President Obama identified as a key feature of this century”, it states.
The report also stated that in light of the election currently underway in India, USTR has “decided to look to an Out-of-cycle Review (OCR) focused on India this Fall to evaluate our ongoing engagement on issues of concern with respect to India’s environment for IP protection and enforcement”.
“The Out-of-cycle Review echoes India’s emphasis on strong government-to-government and government-to-private sector engagement, as the most effective means for resolving concerns in this area.  Through the Out-of-cycle Review, we will seek to ensure that both governments achieve the meaningful, sustained, and effective engagement required to strengthen this critical bilateral economic relationship”, the report said.
Incidentally, OCR is not only for India, but also for Kuwait, Paraguay and Spain.
The “growing concerns with respect to the environment for IPR protection and enforcement in India” was among the top highlights of the USTR report.
While pharmaceutical lobbies such as Pfizer and PhRMA (Pharmaceutical Research and Manufacturers of America) were strongly advocating a downgrade for India, US India Business Council (USIBC) had suggested a balanced approach in view of the general elections. The Special 301 report acknowledges both the submissions by stating that the US industry and other stakeholders had expressed “a heightened level of concern about the deterioration in India’s environment for IP protection and enforcement”.
“We share many of the same concerns”, the report states, while adding that it decided for status quo after considering “the range of stakeholder views and how to most effectively make progress with respect to addressing these concerns”.
“In announcing this year’s determination with respect to India, we are redoubling our efforts to seek constructive engagement that will both improve IP protection and enforcement in India and support India’s efforts to achieve a decade of innovation and advance its legitimate public policy goals, including access to affordable medicines", it said.
[email protected], joecmat[email protected],
[email protected]
Tags assigned to this article:
economy web exclusives ustr joe c mathew othertop2 2014 elections congress manifesto ipr review bjp manifesto