Dhoni has taught me to be better human being: Hardik Pandya

Dhoni has taught me to be better human being: Hardik Pandya

New Delhi [India], July 7 (ANI): As wicket-keeper batsman MS Dhoni celebrates his 39th birthday today, all-rounder Hardik Pandya said that the former skipper has taught him to be a better human being.
Pandya had made his ODI and T20I debut under the captaincy of MS Dhoni and now the duo enjoys great camaraderie both on and off the field.
"Happy birthday to my Bittu from your Chittu. My friend who has taught me to be a better human being and stood by me in bad times @msdhoni," Pandya tweeted. 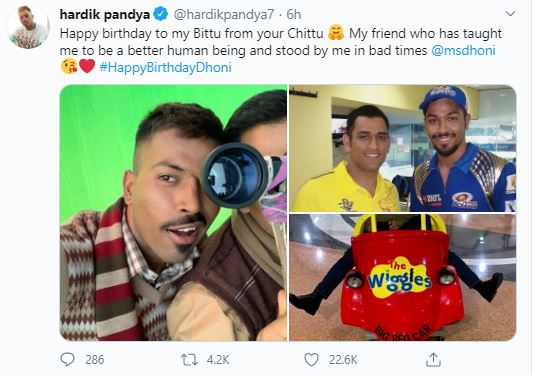 Spinner Kuldeep Yadav labelled Dhoni as a great human being as he extended the birthday wishes to the former India skipper.
"Happy birthday Mahi Bhai. I hope you have a wonderful and fantastic day. Thank you for being such an amazing human being. God bless you," Kuldeep tweeted. 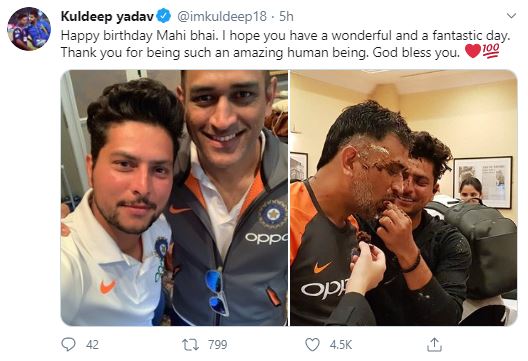 "Many more happy returns of the day to a man whose composure and patience continues to be an inspiration. #HappyBirthdayDhoni," former India batsman VVS Laxman tweeted. 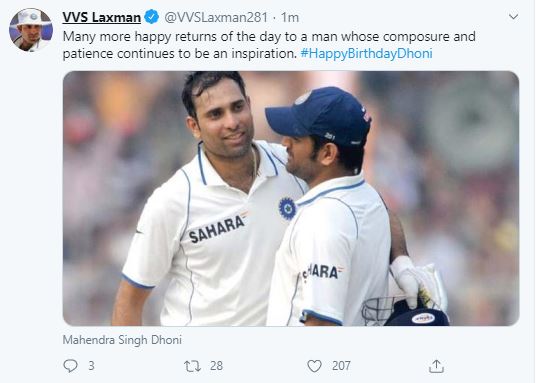 "Once in a generation, a player comes and a nation connects with him, think of him as a member of their family, kuch bahut apna sa lagta hai. Happy Birthday to a man who is the world ( Dhoni-ya ) for his many admirers. #HappyBirthdayDhoni," former India batsman Virender Sehwag tweeted. 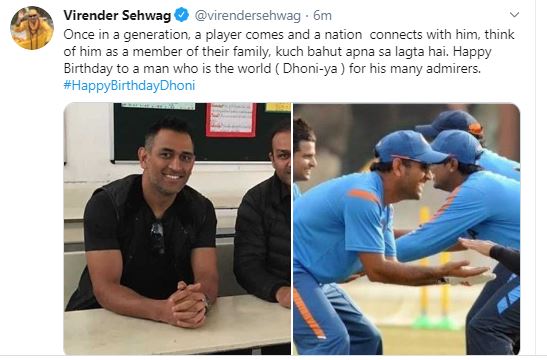 Dhoni has so far played 350 ODIs with his highest score being 183 against Sri Lanka. He also remains the only captain to win all major ICC trophies (50-over World Cup, T20 World Cup, and Champions Trophy).
Over the years, Dhoni has cemented his place as one of the finest wicket-keepers across the world. His quickness behind the stumps has given India many breakthroughs as the Ranchi-based wicket-keeper does successful stumpings in no time.
He is also very successful in taking the review and many have jokingly remarked to change the 'Decision-Review System's' name to 'Dhoni-Review System'.
In December 2014, Dhoni announced his retirement from the longest format of the game and it gave a chance to the likes of Wriddhiman Saha to cement their place in the side for the longest format of the game.
Then in 2017, Dhoni handed over the captaincy reins to Virat Kohli in the 50-over format. However, the wicket-keeper enjoys a great camaraderie with Kohli and the duo have often been seen taking decisions together on the field.
During Dhoni's leadership, India also managed to attain the number one ranking in Test cricket. His Indian Premier League (IPL) franchise Chennai Super Kings has also managed to win the tournament three times under his leadership.
Dhoni was slated to return to the cricket field on March 29 in the IPL's opening match between Chennai Super Kings and Mumbai Indians. However, the tournament has been postponed indefinitely as a precautionary measure against coronavirus.
Thirty-eight-year-old Dhoni has been currently enjoying some time away from the game. He last played competitive cricket during the 2019 World Cup.
Dhoni had to face criticism for his slow batting approach during India's matches in the tournament.
Earlier this year, Dhoni did not find a place for himself in the BCCI's centrally contracted players list.
BCCI had released the list of central contract list of players for the period from October 2019 to September 2020. (ANI)