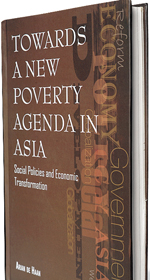 In India, inclusive growth has become a buzzword, even though one really means inclusive development. What is the poverty-reduction agenda for able-bodied poor, who are in working-age groups? Reforms are about tapping market-access opportunities and everyone is not able to tap these opportunities. That is because of inadequate and inequitable access in education or skills, health, financial products, physical infrastructure, markets, technology, information, networks and law and order. Hence, inclusion must attempt to remove exclusion in these. That's how poverty reduction initiatives can be interpreted, be it in Bharat Nirman or PURA (provision of urban amenities in rural areas).

Globally, poverty has declined (even if we recalibrate the poverty line to $1.25 a day, instead of $1), thanks to growth in India and China. If we can remove inequities in access to inputs, poverty reduction will be sharper, especially if we throw in rural sector reforms, where poverty throughout South Asia is concentrated. Arjan de Haan, who has worked as social development adviser for the UK's Department for International Development (DFID) in India, is unlikely to disagree with any of these propositions. DFID is the UK department responsible for promoting poverty reduction. Haan discusses "social policy". It is actually an expression that is difficult to pin down, but definitions given in the book are imprecise. As far as I can make out, social policy is public policy towards poverty and welfare, as driven by agencies of the market, government, family and the voluntary sector.

Interpreted differently, this simply seems to say development may proceed according to a universal template, but individual country-specific contexts and institutions make a difference. For example, "interests" in India are described as electoral cycles, trade unions, SC/ST/OBCs and institutions, which are "a patchwork of programmes and institutions, colonial legacy, federalism, centralised welfare programmes", while "international influences" are "colonial legacies, global social science research networks". Thus, "ideas" behind the welfare regime are of universalism.

There are nine chapters in the book, in three parts. The first part constitutes social policy in an age of globalisation, while the second is on social policy regimes in Latin America, Africa, East Asia and South Asia. The first part reviews the literature on social policy and, perhaps, this is an important issue for donors. It is also easy to caricature the Washington Consensus. But Washington Consensus, unless it is interpreted simplistically, does not argue at all that institutions and country-specific contexts are unimportant. But specifically for India, the first part does not help our comprehension much. In so far as "interests" are concerned, there is a far better exposition of post-Independence social contracts and post-1991 threats to them in Atul Kohli's work, Democracy And Discontent. Sample this. In the second part, Haan says: "The dominant social policy approach in India has been one… and partly through its colonial links — of welfarism or residualism, which aims to limit social protection to a small part of the population, the deserving poor, and considers funding as a cost and not investment... and as a safety net. One of the key questions will be the extent to which the inclusive-growth model of the UPA government has been able to change this deeply rooted approach." This can be interpreted as the historical Indian social contract having not been for a welfare state, as it has been understood in Europe, especially in the Scandinavian countries.

Despite the increased importance of the National Advisory Council and enunciation of entitlements (employment, education, food), it is doubtful there is consensus in India on building inclusion and a welfare state in that sense. If nothing else, India will be unable to sustain it fiscally and there are opportunity costs of resources. There is plenty of literature on welfare states, not just by Esping-Andersen, a Danish sociologist whose work has influenced de Haan. The book offers a new way of looking at poverty reduction in India, Asia, and a bit about Latin America and Africa. Does it offer new insights and alternative suggestions on formulating policy? That might be expecting too much.

Author's Details:
Arjan De Haan is senior lecturer in social policy at the Institute of Social Studies, The Hague. He holds a Ph.D in social history from Erasmus University Rotterdam. He was social development policy advisor at the UK's Department For International Development in China and India. His books include Reclaiming Social Policy: Globalization, Social Exclusion and New Poverty Reduction Strategies (2007).