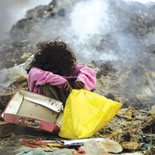 The four nations, Brazil, China, India and South Africa -known in climate talks as the BASIC bloc - released a joint ministerial statement late on Tuesday saying responsibility for the outcome of the latest round of U.N. climate talks in Doha lay in the hands of rich countries.

"Ministers reaffirmed that the Kyoto Protocol remains a key component of the international climate regime and that its second commitment period is the key deliverable for Doha, and the essential basis for ambition within the regime," they said.

They added that rich nations must produce more ambitious targets for reducing greenhouse gas emissions, which fall far short of what scientists say are needed to avoid runaway climate change.

The Kyoto Protocol, the only international treaty to set legally binding targets on cutting greenhouse emissions, expires at the end of the year. Around 30 European nations and Australia have signalled they are ready to take on new targets.

But major emitters such as Canada, Japan, Russia and the United States will not take part, saying the U.N. pact will have no environmental impact until it imposes similar targets on large developing nations, including China and India.

China and India are the world's biggest and third biggest emitter of greenhouse gases, respectively.

A report released this week by the World Resources Institute, a U.S. think tank, showed two-thirds of the world's planned coal-fired power plants will be built in China and India, ensuring their carbon output will continue to soar.

Developed countries are keen to begin negotiations on a new treaty to cap emissions from all countries.

At last year's U.N. climate talks in Durban, negotiators agreed that such a deal must be reached by 2015 at the latest, and go into force in 2020.

But the BASIC countries said even a new treaty should be negotiated along the same principles as the current U.N. climate convention, keeping a division between rich and poor nations.

The Kyoto Protocol states that countries are bound by the principle of "common but differentiated responsibilities", which puts most of the burden for combating climate change in the hands of rich nations with larger historical rates of emissions.

"The Durban Platform is by no means a process to negotiate a new regime, nor to renegotiate, rewrite or reinterpret the Convention and its principles and provisions," they said, signalling they will not accept the same treatment as rich countries in any new treaty.

The statement shows the developing nations are concerned about the pace of the negotiations, said Li Yan, a climate campaigner with Greenpeace China.

"Big developing countries, especially China, will need some time to do its homework and think of what it can do," she said.