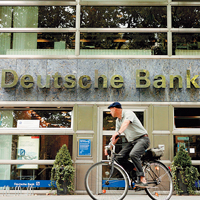 08 November, 2014
Print this article Font size -16+
Deutsche Bank has downgraded State Bank of India to "hold" from "buy", calling April-June "one of its worst quarters in terms of asset quality."

Deutsche said the drop in net interest margins may leave India's biggest lender with not much cushion to provision for weak asset quality.

"The uncertain monsoon and economic outlooks should remain a challenge for SBI and for most public sector banks, in our view," Deutsche said.

SBI shares dropped to a three-month low after its bad loans were nearly double of expectations, taking the sheen off a second straight surge in quarterly net profit.

Morgan Stanley maintained SBI at "underweight", and cut its target price to 1,390 rupees from 1,425 rupees citing weak trends in margins and non-performing loans in a report dated Sunday.